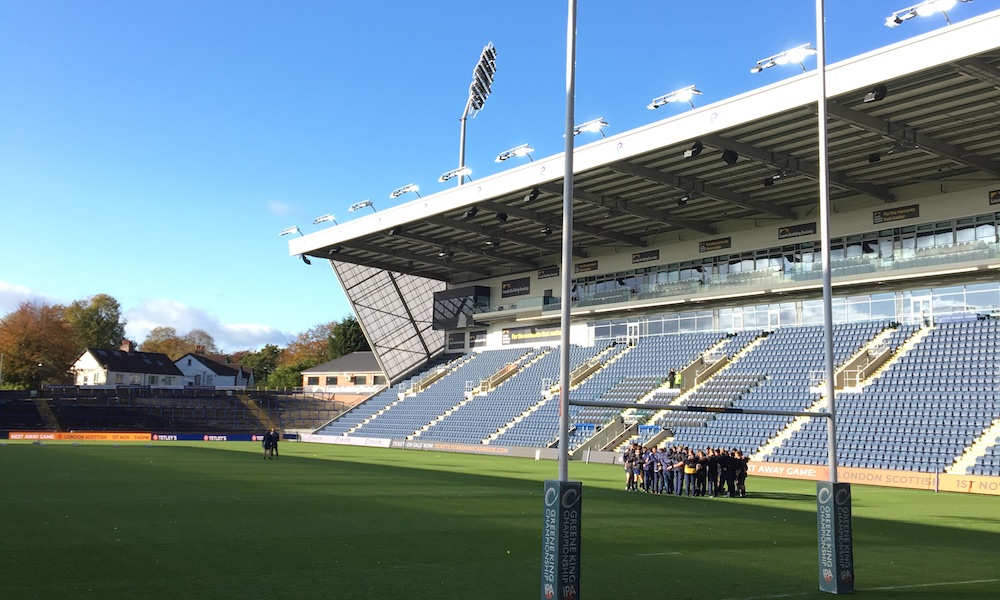 James Stokes led the way with a four-score effort as Coventry got their first away win of the season in style at Headingley.

Ten tries were scored in all, with the tone set by smart play at a breakdown which won a turnover. The home defence held and forced a fumble but while they cleared their lines play remained in Carnegie territory and a couple of minutes later Coventry were over.

A penalty was sent to the corner and a rolling maul headed rapidly towards the line. It was pulled down, but while Sione Faletau had done enough to receive a yellow card there was no penalty try. Nevertheless Cov had another penalty, Will Maisey chipped to the corner and Scott Tolmie peeled off the drive to score.

Three minutes later Tolmie was over for his second. Rory Jennings spied space and sent a lovely kick to the home five-metre line, and when Ben Sowrey overthrew the lineout Tolmie snapped up the loose ball and there was no stopping the hooker from close range.

Fifteen minutes in and Coventry were over for their third, Senitiki Nayalo the beneficiary of a run from James Stokes which put the team into the 22 and an Adam Peters effort which came close to the whitewash.

Coventry had been clinical while Carnegie had barely got out of their half, but at the end of the opening quarter they put together their best passage of play. Neat passing and powerful running down the right touchline brought a penalty for offside, which was kicked to the corner. Home forwards came around the corner and into the in-goal area, Coventry doing well under pressure to hold the ball up.

But now back to full strength Carnegie kept the pressure on, and after they turned a penalty into a scrum Callum Bustin came off the back to crash over by the sticks. Joe Ford landed the conversion and it was no less than his team deserved for their efforts over the preceding minutes.

Back came Cov, and on the half-hour they had the bonus point try in the bag. Play came quickly off a lineout on the home 22, and when Maisey wrapped around Jennings and Heath Stevens to create confusion in the Carnegie defence and space for the score.

A fifth came five minutes before the break, Carnegie’s pack not able to resist the power turned on by the Coventry pack at a scrum five metres out, Nayalo dotting down for his second. And there was still time for a sixth, too, James Stokes rounding his opposite man Tim Bitrim to go over in the corner.

The lead may have been a healthy 31 points at the break, but there had been a couple of scores left on the pitch thanks to a couple of two-on-ones which had not been turned into certain tries.

And when Carnegie came flying out of the blocks at the start of the second half they turned pressure into points with Bustin’s second. The evergreen Tom Varndell had put his team into a great position by coming off his wing to take a short ball from Ford and scythe into the 22.

Cov recovered that time, but in their next attack Carnegie took a more direct approach which paid dividends as Bustin was sent over by some neat offloading.

It was the powerful number eight’s final action of the day, gingerly heading off soon after the kick-off.

Any nerves for the travellers which might have been caused were soon settled by a try for the highlights reel. Cov played off a scrum five metres in from the left touchline, David Halaifonua made the extra man in midfield, Rob Knox made metres down the right and fed Stokes for the score.

Carnegie hit back with a broken-field sucker-punch, Jamie Elliott the scorer, but this was negated almost immediately, Tom Kessell’s snipe finished off by Stokes for his hat trick.

With 20 minutes to play Cov were past the 50-poin mark, but when Knox was ruled to have challenged illegally in the air the visitors were down to 14 men. They shrugged off the disadvantage to extend the lead by a further seven points, Stokes intercepting a Varndell pass to sprint in from halfway, but Carnegie showed admirable commitment to keep on playing, stringing together some lovely offloads and supporting lines to take play play from halfway to deep into the 22 in the flash of an eye.

Ultimately though it came to nothing, unlike Stevens’ break the next time Cov got the ball. Tony Fenner put the centre through a gap and was the man in support when the action reached the other end of the field, but while Carnegie got possession back their attempt to play from deep was ill-advised at best, Knox collecting Ford’s cross-field kick to round Varndell and score in the corner.

Carnegie’s positive effort and attitude was rewarded by a fourth try in the final play of the game, Jake Brady driven over by a 14-man driving maul, but by then the contest had long gone.