We’re up and running

A GOOD start was director of rugby Rowland Winter’s assessment as Coventry Rugby opened their run of pre-season games with a 48-19 win at Leicester Lions last night.

With a number of players making their first appearance in a Cov jersey, the visitors overcame a testing wind and stubborn resistance from the home side to finish with eight tries.

“I’m very pleased,” said Winter. “We’ve used upwards of 45 players including a good chunk from the Development Academy, some of them having their first adult rugby, which is great.

“I thought it was a bit disjointed at times, but the boys did well to handle the disruption. We showed some good components of our defence, especially when down to 13 men which was a nice test for us, and in our attack there was lots of free-flowing play and some really disciplined forward play with our catch-and-drive.

“We got little bits of all our game going and created a base that we can build on next week.

“The energy and aggression built up over six or seven weeks of training came out in bursts, and overall we’re very happy – Leicester Lions put up a strong fight and it was a challenging match.”

Added Winter: “We’ve learnt a lot about all the players and, on top of that, everyone has had 20 or 30 minutes of a proper hit-out which is really important that we do nice and early in August.

“We’ll build on it next week and keep building all the way through to the Hull Ionians game which is the most important part.”

Fired-up Lions took an early 5-0 lead and, against the strong wind, it was 18 minutes before Cov levelled with Scott Tolmie on the end of the drive from a penalty line-out.

A penalty try followed three minutes later from an identical situation, and Brett Daynes and Nile Dacres added two more on either side of a second Lions try to leave Cov 22-12 up at the break.

A Tom Jubb burst set up a try for Pete White three minutes after the restart, Tony Fenner adding the drop-kick conversion, before Cov went down to 13 men with yellow cards in the space of a couple of minutes for Sam Tuitupou (a third crunching tackle in quick succession deemed dangerous) and Cameron Gray (accumulation of team offsides).

Lions were unable to capitalise, and Heath Stevens claimed Cov’s  sixth try on 62 minutes before excellent finishes on opposite flanks from Louis Roach and Kwaku Asiedu put the seal on a good night’s work – Lions breaking clear to score their third try on the final whistle. 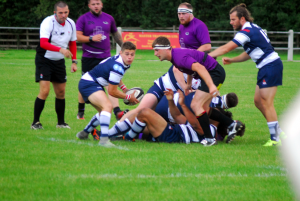