THE COUNDON ROAD CLASSIC A day to remember 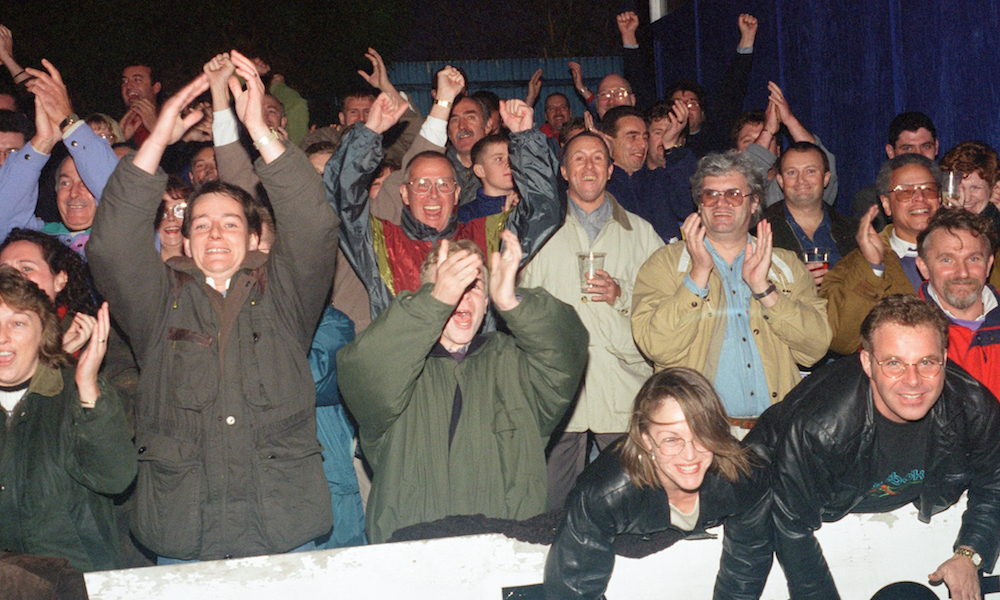 By John Wilkinson and John Butler

It really is that long, touching 24 years, since Coventry and Newcastle last met in the Midlands. Yet ask any Cov fan who was there that fateful day and most will instantly recall the dramatic events surrounding one of the greatest days in the club’s long history.

In reality, it had had all begun to take shape a year earlier, the first season with Derek Eves at the helm as player/coach.

The last day of the 1995/96 season, after a number of disappointing campaigns, had seen the first team squad triumph 53-27 away at Reading to secure promotion out of the old Third Division.

On to 1996/97, officially the first season of professional rugby in England. Cov had been preparing for this and in some ways were ahead of the rest, but little did anyone connected with the club fully realise in advance what was about to happen, particularly in relation to the longer-term state of affairs at Coundon Road.

A promising beginning saw a home draw against a strong and ambitious Richmond side with the team then notching up the club’s biggest away league win at the time, 61-3 at Rugby Lions.

Leading up to the eagerly-awaited Newcastle game the squad racked up five consecutive wins, including the record league score amassed by Cov Rugby, 102–22 at home to Nottingham, as well as a 66–6 win over London Scottish. The scene was being set.

John Wilkinson was working for the Coventry Evening Telegraph, while John Butler was at that period working full-time for the club.

Some three weeks before the game, chairman Gerry Sugrue announced that match tickets would go on sale immediately, all at one price for seniors, with admittance to the main stand at Coundon Road ‘first come, first served’ on the day.

The excitement building up in those three weeks could be gauged by the volume of daily visitors to the portacabin, which was effectively the club office on Barkers Butts Lane, who came to buy tickets.

Little did we realise, though, quite how big it was to become. On the Friday evening preceding the game, with the office due to close, at 5pm we still had a queue of people stretching right back up to the traffic lights at Moseley Avenue – some 250 yards at least. Reinforcements in the form of former player Bomber Evans and his wife Jill, who happened to be there, finally saw us clear the queue by around 6:30pm!

And so to the day itself, with the stand fully occupied by 2pm for the 3pm kick off and with some 8,000 packed into the old ground. JW was supplying running copy for the CET Pink and JB was helping commentate live for BBC CWR.

Newcastle were top of Division One (now the Championship) table, brimming with 14 internationals, and led most of the way as Cov (third at the time), battled to keep in touch.

There was never much between the two teams as they went head to head in a cauldron of noise from an enthralled and expectant crowd.

Newcastle’s cause wasn’t helped when they lost England winger John Bentley – who would tour with the Lions to South Africa at the end of the season – sent off just before half-time for punching Andy Smallwood, and although the visitors kept their noses in front Cov were never far behind, courtesy of a try from full back Wayne Kilford and two penalties from fly half Jez Harris, who still holds the club record for the number of points kicked in a league game.

Into the closing minutes, and Cov’s pack worked an opening for winger Smallwood to dive over wide out and nudge Cov into a 16-15 lead…..only for a knock-on from the restart to hand back possession to Newcastle, leading to a Rob Andrew drop goal which scraped the upright on its way over, 16-18.

Into added time, with Newcastle seemingly there, Cov won possession some 40 metres out, it might have been a tad further, and Harris, sweet as a nut, landed the match-winning drop goal.

Coundon Road erupted, my voice on local radio, I was told, went up a fair number of decibels. Cov had won a famous victory!

Sad to relate, Dean Ryan and his colleagues did not take the defeat too well. Leaving without observing the courtesy of the post-match meal, the away party were seen purchasing from the fish and chip shop by the traffic lights. A bill also followed for the damaged electric light fitting in the away dressing room!

Overall it was quite a day, but ultimately at what cost? The season ended with Cov securing a place in the promotion play-off against London Irish, winning the home leg 16-14 on the Wednesday evening before losing the second leg at Sunbury the following Sunday 28-7 as the Exiles retained their Premiership place and ended Cov’s dream.

It was to prove to be all at a high cost, in that by the end of the following season the bailiffs had been called in and the rest, as they say, is history.

Nevertheless, as we all know in these difficult times for Championship clubs, that Premiership dream lives on for Cov Rugby.

For the record, the two line-ups that day were: