Team news for visit to Fylde

After impressing off the bench, Titchard-jones (pictured) comes into the starting XV with Jimmy Litchfield moving to tight head in place of Phil Boulton, who is ruled out after suffering a hamstring injury at training last night. 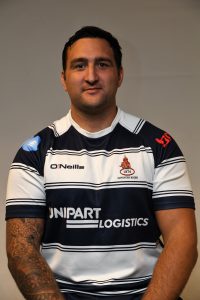 Centre Heath Stevens captains the side in game which pitches top of National League One against bottom – Cov’s hard-earned win over Bishop’s Stortford last week taking them three points clear of the rest, while Fylde have had a difficult start with just one win so far.

Victory last week came at a price for Cov with injuries to scrum-half Pete White, who will be out for six to eight weeks with ankle and knee ligament damage, and winger Rob Knox who faces a one to two-week lay-off with a hand problem.

Dave Brazier and Tom Emery start in their places with Ben Palmer and, for the first time, Neal replacing them on the bench.

There are other changes in the pack where Nile Dacres and Latu Makaafi return after a week off and George Oram and Phil Nilsen are rested.

Second row Dacres partners Cameron Gray, who keeps his place after a solid debut last week, and Scott Tolmie starts at hooker with Wasps loanee Gabriel Oghre coming on to the bench. Brett Daynes moves to No.8 with Luke Narraway on the bench where Development Academy prop Jeannot gets a first call following Boulton’s injury.

“Nathanael has been very impressive over the last month and deserves his start, and Scott gets the nod at hooker as Fylde play an expansive style of rugby at a high tempo which suits his game,” said director rugby Rowland Winter.

“Cameron impressed us last week and we expect to see him grow in confidence now he has broken into the match day squad.

“George has played nearly every minute so far this season, and Latu comes back into a rotated back row with Olly Povoas narrowly missing out. We are very lucky to have such great competition in the back row, and area which is tough to select as they all bring different qualities.

“Gabriel has shown a great set of skills during training and in pre-season, and has also impressed for Wasps in the A League, and James has been waiting patiently for his opportunity while putting in some good performances in the Zoo league and training.

“Luc has also been performing strongly in the Development side and has earned his chance.”

Cov have to go back four seasons for their last win at The Woodlands, and Winter wants a fully focused and committed approach from his players.

“Fylde is a tough pace to go to and they picked up a good win over Rosslyn Park in their last home game, so they will have increased confidence from that.

“We didn’t mentally prepare well enough when we went there last season, and we were not on top form against Bishop’s Stortford.

“It will be a hard test and we will need to be switched on throughout the game to deliver a top performance – I’m looking for a response from the team who didn’t meet our normal standards last week.”

Coventry Development’s Zoo Sports Shield game at Barnes has been postponed due to injuries and unavailability.

Knox, Tony Fenner (ribs) and Max Trimble (foot) are all one to two weeks away from returning with prop Andy Brown (hand) due back in three to four weeks. Alex Grove (groin) will miss the next 10 to 12 weeks and Tom Poole is expected back in February after a neck operation.

Said Winter: “While we are looking forward to having players back, we are excited to give opportunity to our younger squad players.  We’ve got a great squad, so this is a great chance to show our depth and quality.”

Will Week 7 throw up as many surprises, or near surprises, as last week, or will results revert to the exected? As the top three discovered last week, there will be no easy games either home or away. Plymouth Albion, up to second place, cannot be too complacent over their visit to Caldy. The home side has settled in well to NL1 and have a 50% record, getting four try bonus points in their six games. Albion struggled at times against a dogged Cambridge defence and Caldy should prove equally combative. A close, tense games is expected, the result of which could be a surprise.

Darlington Mowden Park, after their surprise loss at Old Albanian, are back at home to face Old Elthamians. OE are on a roll of four successive wins and have enough experience in their pack, as well as some effective backs, to trouble the home side. However, at home DMP are still unbeaten and they won’t be relinquishing their record too easily as they need the win to keep pressure on the leaders Coventry.

Blackheath, apart from a hiccup against Coventry, are looking ominously dangerous in fourth place and only six points behind the leaders. They entertain Old Albanian who surprised many with their defeat of DMP, so cannot afford to be complacent. Blackheath should have enough to win this one with something to spare, so keeping in touch with the top.

On the same points as Blackheath in fifth spot are Ampthill & District, who are now finding some good form with only one defeat. This week sees them at home to Loughborough Students who have seen large scale changes in their squad since the start of the season. The Students are back in 14th place with only one win and urgently require a victory here to move out of the danger zone. However, at home Ampthill will have too much power in their forwards and effective backs to allow the Students anything from this game.

Bishops Stortford at home to Hull Ionians is an intriguing game. The hosts put up a valiant display at Coventry and felt they should have sneaked it, whilst Hull Ionians were obtaining their first win of the season, finally taking them off the bottom of the table. At home BS should be too powerful but Ionians cannot be written off as they do have an effective pack and a try scoring tactic of driving mauls from the line-out. It may be a closer result than first expected.

Two sides separated by just one point, Cambridge meet Rosslyn Park in the Fens. Cambridge surprised many with their defensive display away to Albion last week, holding them to just seven points, whilst Park put seven tries past a sorry Loughborough Students. Another game which could go either way, but home advantage might just give Cambridge the edge.

Out of sorts sides and both on 12 points, Esher and their visitors Birmingham Moseley are recovering from poor results last week, more so Moseley who went down heavily at home. Esher themselves let a good lead slip at Hull Ionians but at home can be a force and if they get their game together, a substantial home win is expected.