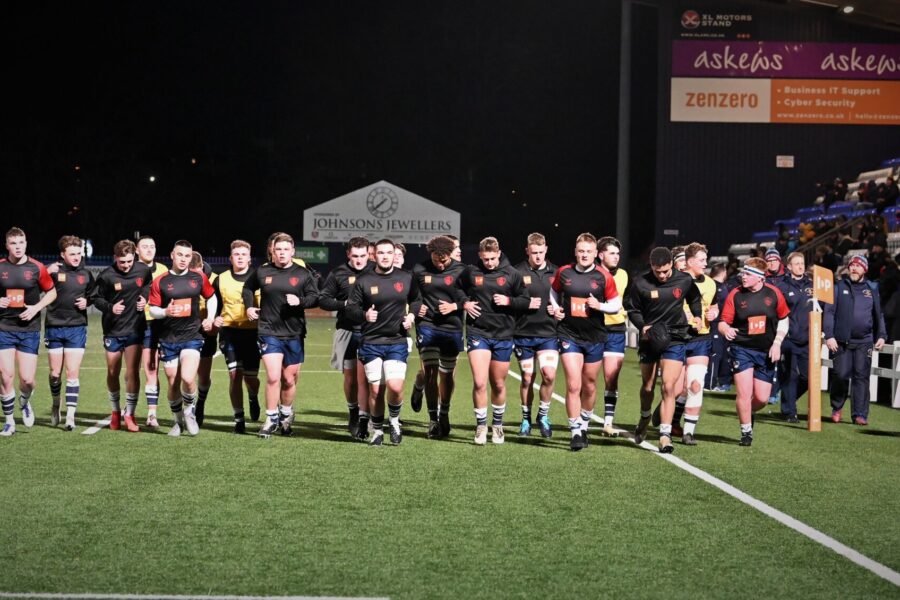 Coventry Rugby has named their side to play the Army in a friendly fixture on Saturday (Butts Park Arena, kick-off 3.00 pm).

There are four personnel changes and four positional switches from the team that played the RAF in the friendly fixture last Wednesday.

The RAF fixture was the first time fans had seen some of the Senior Academy (SA) and many of the Coventry Moulton Academy (CMA) players in action.

The RAF walked away with the win by just one point, the game highlighted the talent in Coventry Rugby’s pathway programmes and had many feeling like winners – regardless of the score.

Although the team is largely comprised of development squad members, Luc Jeannot and Rob Knox bring experience to the side and join their fellow Senior Squad members James Martin and Joe Richardson in the starting XV.

Jake Bridges has been impressing fans from the bench in Senior League fixtures this season – most recently against London Scottish last weekend.

In regards to the second row, CMA player Ray Kanyasa moves to the number 4 lock, having appeared at number 5 against the RAF. The Coventry Moulton Academy has had an incredible unbeaten season and looks sure to win their BUCS division 4b league.

Guest player Geordie Irvine is introduced to the team, appearing at number 5 lock to complete the second row. Irvine belongs to Northampton Saints Senior Academy.Irvine has already experienced international honours, having been named in England under-17 training squad in 2020 before representing England at under-18 level.

Irvine joins his fellow Saint, Duane Willemson who appeared in the RAF fixture. Willemson remains in the back-row and is joined by SA players Tom Ball and Fred Betteridge who completes the partnership. Ball was named as Captain for the RAF fixture and continues his Captaincy on Saturday.

Knox’s introduction has caused a slight shift to the backs. Although, half-backs Finn Odgen (CMA) and Evan Mitchell (SA) remain in the same positions.

Louis James (SA) replaces James Martin on the left-wing, with Martin switching to the right.

Forming the centre partnership, the younger Betteridge brother, Ollie (SA) remains on the inside with Rob Knox on the outside.

On the bench, Northampton Saint Callum Burns remains as a finisher as he did for the RAF fixture. Ollie Stone and Josh Marsden from the Coventry Moulton Academy move to the bench due to Jeannot’s and Bridge’s introduction to the team.

From the Coventry Moulton set up, George Hallam from the University programme and Cameron Taylor, Sam Peppitt, David Opoku, Quentin Blythe and Zac Byers from the U19 programme have been named as finishers.

If you’re unable to make it to Butts Park Arena, tune into BBC CWR or keep up to date via the @CoventryRugby Twitter.

Thank you to Midrepro for sponsoring the match.