SCRUM-HALF Rhodri Adamson is poised to take his first step on the international stage next month after being named in the Jamaica squad for the Hong Kong Sevens.

The tournament will mark the first appearance of the Jamaica Crocs in the HSBC World Rugby Sevens Series after they secured their place by finishing third at the Rugby Americas North qualifying tournament in Trinidad last November.

Adamson, whose mother was born in the Jamaican capital Kingston, had to miss the qualifier because of his commitments to Coventry, but has been involved with the fledgling squad for around a year and is delighted to have received his call-up.

“I can’t wait,” said Adamson, who has made 15 appearances for Cov this season and has been on loan at Nuneaton. “I think it’s going to be something else with the big crowds and all the other stuff going on.

“I was aware it was in the offing, but it was still a bit of a surprise. I’ve been involved for just under a year now and the main focus has been the Commonwealth Games on the Gold Coast coming up in 2018.

“I didn’t go to Trinidad because it was in season, but they qualified so I was selected. I played for them last summer in tournaments in England, but this will be my first official match for them.”

Adamson, who played for Newcastle Falcons in the Singha Premiership Sevens, flies out with the squad on April 1 and the tournament runs between April 7-9.

“I enjoy playing Sevens, I’m really looking forward to it, and also coming up are the qualifiers for the Commonwealth Games and then the World Cup in America in July next year,” he said.

“Nine of the 12 boys in the squad are UK-based and there are a few of us from National One clubs, it’s a pretty good standard.” 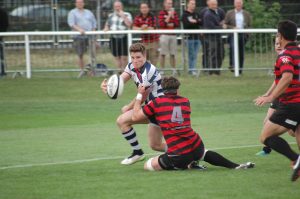