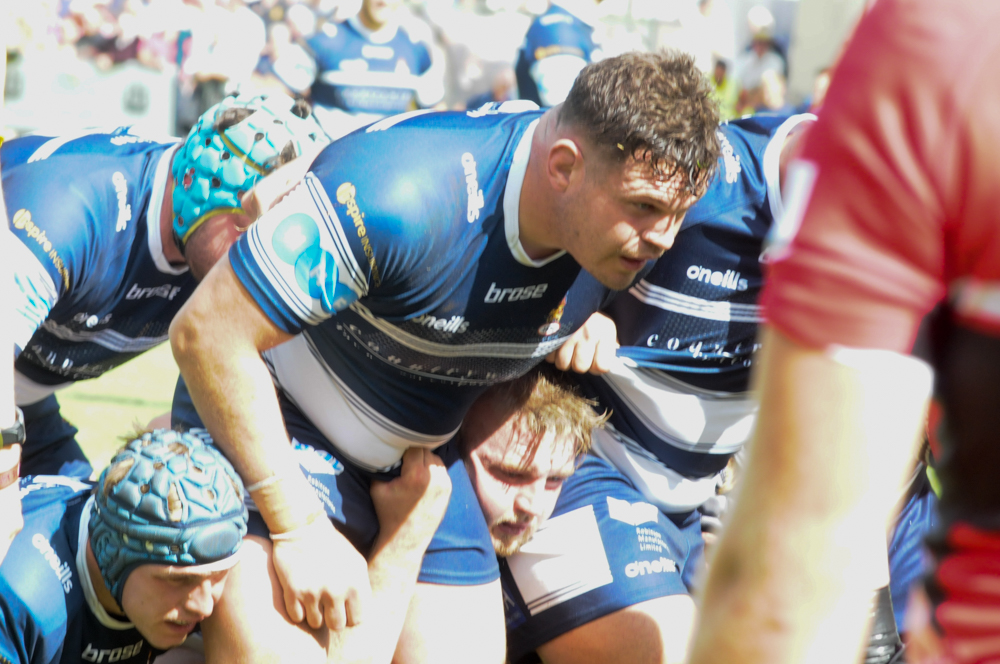 Despite claiming an outstanding Tom Kessell counter-attack try midway through the second half, Coventry Rugby slipped to a 35-10 defeat at the hands of hosts Cornish Pirates.
The visitors were badly disrupted by injury, losing James Stokes and David Halaifonua to ankle damage before the interval, and as a consequence ending up with scrum half Kessell on the left wing and Tony Fenner at full back.

However, on their first visit to Mennaye Field in nearly a decade, they also paid a heavy penalty for failing to take their chances.
Rowland Winter’s team had possession within close proximity of the home line four times before the break, but on each occasion failed to convert this field position into points.
Along with the concession of tries to Tom Duncan and Harry Strong, this left them chasing a 17-point interval deficit in the second 40 minutes.
Will Maisey’s conversion of Kessell’s thrilling long-range effort shortly before the hour mark then sparked comeback hopes.
However, the Pirates showed why they have such a formidable home record by firmly shutting the door on their visitors through final quarter touchdowns from Duncan and Sam Matavesi.
In the process this took this moved the hosts to the top of the fledgling Championship table, while Coventry are nestled in mid-table ahead of next week’s home game against Bedford, who like the Pirates have made a two-from-two start to the Greene King IPA Championship season.

The two fly halves swapped early penalties with Will Cargill’s straightforward effort which followed a scrum offence being cancelled out by Maisey’s 25-metre kick awarded for an infringement on the ground after some useful interplay between David Halaifonua and Jack Ram.
And after Cov twice failed to convert close-range attacking lineouts into points through a crossing penalty and a spilled ball, the Pirates made them pay by claiming a seven-pointer on their first visit to the blue-and-white 22.
This try started with Rory Parata’s midfield break and ended with his pack driving No.8 Duncan over for a score which Cargill converted.
The visitors were then hit not only with a double injury blow, but also a 10-point Pirates salvo in the closing minutes of the first half.
Cargill added a second penalty from point blank range when Cov were offside under their own posts, then on the stroke of half-time the home No.10 converted Strong’s try which came down the left flank following a lineout on Cov’s 10 metre line.

The visitors missed a good chance to immediately respond when White broke from inside his own half but was unable to locate Kessell with the final pass.
But after Cargill had added a third penalty for the hosts, awarded for a high tackle on the visitors’ 22, Cov’s fill-in wide man did claim a brilliant long-distance score, courtesy of Maisey’s break and a superb Heath Stevens pass.
This raised hopes of a late revival, but these were promptly crushed by a well-executed lineout drive, touched down by Duncan.
And the Pirates also had the last – and bonus point clinching – word through hooker Sam Matavesi, who cut a good line from Harvey Skinner’s pass.