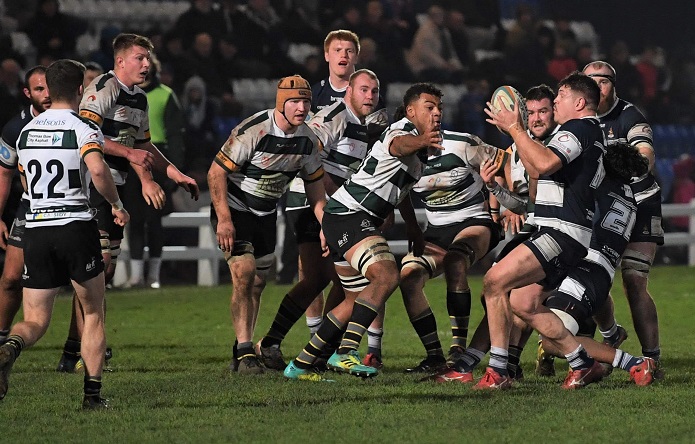 Championship league rugby takes off again this weekend, with Cov travelling to East Midlands rivals Nottingham at Lady Bay for the second time in three weeks.

This season to date, with both meetings having been in the cup, the spoils have been shared.

Nottingham’s league record before the break was impressive. Six wins from nine leaves them currently in fourth place. Only Bedford Blues, very early on in the season, have lowered the green-and-whites’ colours at Lady Bay, while high-flying Ealing Trailfinders were trounced there 42-27 at the end of October.

Cov’s overall records were lost during wartime hostilities, but thanks to assistance from Nottingham colleagues, it has been possible to trace fixtures right back to the very first meeting. This match, in 1891/92 season, in the old Midland Counties Cup, was won by Cov.

Looking solely at league meetings, Nottingham currently lead the series 11 -7, the first of those being in the inaugural league season of 1987/88 and the most recent in 2009/10.

Cov’s first league success against the East Midlanders came at the fifth time of asking, but was worth waiting for, since the 102 -22 win at Coundon Road in October 1996 remains a club league record.

In charge of affairs at Cov’s hosts on Sunday is long-serving head coach Neil Fowkes. Nottingham’s top points scorer in the league is Canadian fly half Shane O’Leary, who joined from Ealing Trailfinders in the close season but missed his club’s cup games through being away on international duty.

Full back James Spittle, who is top try-scorer with four, is one of many players to arrive via Nottingham’s close links with Trent University.

Another player it is anticipated Cov will meet on Sunday is hooker Jake Farnworth, who featured with the blue-and-whites several seasons back while dual registered from Leicester Tigers.

Following this tenth round of league action, Cov move into a three-week league break over the festive and New Year period prior to hosting Doncaster.

Once again, the Supporters’ Club are laying on a coach to the game, bookings to be made via CRSC1874@gmail.com. Departure time from the BPA 12.15pm, with kick off being at 3.00pm.