WEEK 7 saw this season’s normal service resume with only 50% home wins recorded. The top five sides all won with try bonus points to boot, meaning they stay covered by six points. Not such good news for the bottom six sides who all lost, increasing the gap between top and bottom.

The biggest score of the day was in the north-west as leaders Coventry crushed bottom side Fylde with ten tries.

Also travelling to the north-west and coming away with maximum points was second-placed Plymouth Albion. The first half saw a skilful and spirited Caldy take the game to Albion, who were restricted to a narrow 12-7 lead. It was somewhat of a different matter in the second period as Albion took control, helped by the experience of talisman No.8 Herbie Stupple. Overall, Albion’s set piece was in control which caused some poor discipline by Caldy, putting them on the back foot as visitors scored five tries, leaving them just three points behind Coventry.

In front of the biggest crowd of the day third-placed Darlington Mowden Park duly despatched visitors Old Elthamians for a try bonus win. A close first half ending at 14-apiece before the home pack started to take charge, allowing their impressive backs to finish off the job with three second-half tries. OE’s cause was not helped by a yellow card which gave the home side a crucial advantage. The win keeps DMP in third on the same points as Albion.

Blackheath gained the win over visitors Old Albanian in a somewhat scrappy game. OA were not able to maintain their recent improved form as they came up against an impressive home defence. Despite having plenty of possession OA could not score, and as their discipline suffered it allowed Blackheath to take advantage with five tries  for a win that keeps them in fourth place, six points behind the leaders. Meanwhile OA remain in 13th place, just three points above the danger zone.

As expected, Ampthill & District were just too powerful for hosts Loughborough Students who have yet to win at home this season. Lock/back row Syd Blackmore, signed from Bath, proved once again what a good acquisition he is as his influence became more evident. Poor home defence and better finishing by Ampthill saw them move away from their hosts for a deserved try bonus victory, keeping them in fifth place but level on points with Blackheath. Despite a large number of Leicester development players, it is looking grim for Students who fall back to 15th place.

In the end it was close run thing at Bishop’s Stortford who twice nearly surrendered a large lead to Hull Ionians. Unable to maintain the intensity of their fine display against Coventry, BS let Ionians back into the game with both sides scoring four tries. Hull’s confidence grew as the game went on and they fully deserved the two bonus points which take them up a place to 14th, just three points from safety.

It wasn’t such a close game at Cambridge who finally obtained a home win over a disappointing Rosslyn Park side. With the try bonus already in the bag by half-time it was only a question of how many the home side could score which, in the end, was eight. Winger Laurence Hutchinson, out for over a year, scored a hat-trick backed up by two from centre Albert Portsmouth as Park had no answer to the pace and finishing of Cambridge who as a result moved into the top half of the table.

Birmingham Moseley claimed a narrow win at Esher, who saw a 20-17 lead overturned in the second half with some great finishing by winger Mark Harrison who scored four of Moseley’s six tries. Esher stayed in the game, which saw the lead changed hands a number of times, due to Moseley only converting one of their tries. The win moves Moseley to ninth place above both Caldy and Esher. 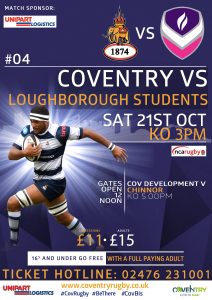