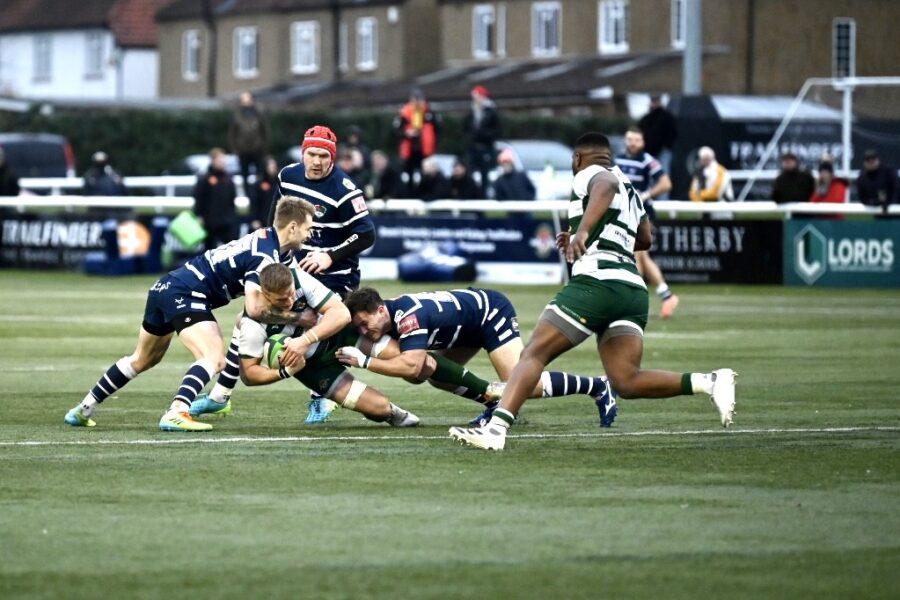 Conditions in West London were relatively mild leading up to kick off yesterday, giving a sense of cautious optimism in the air. Unfortunately, as the temperature dropped early on into proceedings – as did the hope that Coventry would manage to overturn a strong Ealing Trailfinders side at Vallis Way.

The opening of the game was typical to that of a tense Championship match, with a bit of kick tennis leading to the first scrum of the game in the centre of the Trailfinders Sports Ground pitch. Despite a Coventry put-in, the penalty went the way of the home side which was predominately how things would continue at scrum time. A kick to the corner was followed by a mix of patient Ealing build up and determined Coventry defence. The 6th minute of the game, however, showed the sheer physical power of the Ealing side as number 8 Ryan Smid barrelled his way over to pin his name next to the first score of the game. Fly half Craig Willis added the relatively simple extras.

The away side gave a good response, which would mirror their effort and resilience that continued throughout the 80 minutes, despite a score line that at times made for difficult reading. Josh Bainbridge made a nuisance of himself at the breakdown causing an Ealing knock-on. The following scrum gave the same result as the first, and a penalty kick deep into the Coventry 22m led to another strong forward’s effort as Alan Walker made it 12-0 to Ealing.

Just before the quarter mark of yesterday’s game, the away supporters were rewarded for their travels with the best part of the day for the Cov side. Trailfinders were penalised for going off their feet at the ruck, and a monstrous kick from Anthony Fenner put his pack on the Ealing 5m line. Playing with an advantage, the backs spun the ball wide towards the main stand, and despite having what seemed like no space to manoeuvre, Rob Knox managed to squeeze the ball down before being tackled in to touch. Fenner couldn’t land the tricky conversion, but the Coventry side were well and truly back in the contest.

Sadly, the Coventry cheers dissipated quickly as Ealing replied less than two minutes later through Smid once more. The back row forward ran a perfectly timed line off Hampson at scrum half and soon found himself untouched and under the sticks.

The bonus point score came just after the half an hour mark as Kernohan got himself on the end of some quite lovely backs interplay – showing the mix of attacking threat that this Ealing side possess that make them so difficult to deal with. Willis added the conversion and at this point, the Trailfinders were fully in charge of the contest.

The 10 minutes or so before half time were arguably Cov’s best of the game, as they spent some time camped close to the Ealing try line. Some better attack play gave promise for the second period, but no points as the Ealing defence stayed strong and took their 26-5 into the break.

Unfortunately, the dream of a famous away comeback in the capital took a hit in the first minute of the second half. Simon Uzokwe got his name on the scoresheet for the home team after Bodily broke in the midfield.  ET 33-5 Cov

Coventry spent some more time in Ealing territory, but their good attacking efforts came to no avail as Ealing broke once more from their own half and Uzokwe bagged his second 5 pointer of the afternoon. His fly half added the extra 2 points and Trailfinders had a 40-5 lead.

Dan Babos made his Coventry debut as the Dragons loanee replaced the industrious Josh Barton at scrum half. The debutant quickly made an impact as some quick thinking and a quick tap penalty gave the 9 a chance to break through Ealing’s first line of defence, the proceeding kick not quite bouncing into hand and the home side had possession once more.

Following what were deemed as repeated Coventry infringements at the scrum, Luc Jeannot was made to sit out for 10 minutes. With a man extra, Ealing made the most of the advantage and their rolling roll was too strong to stop. Malton went over for the home side’s final score of the day. Typical of the Coventry team out there yesterday, they fought up until the final whistle with some good attacking play in the centre of the park, before an Ealing turnover put an end to what was a tough day at the office for the Cov side.

Coventry are back at home next week 29/01 against Cornish Pirates which is set to be a cracker! Head to ‘Matchday Tickets’ to get your ticket now.