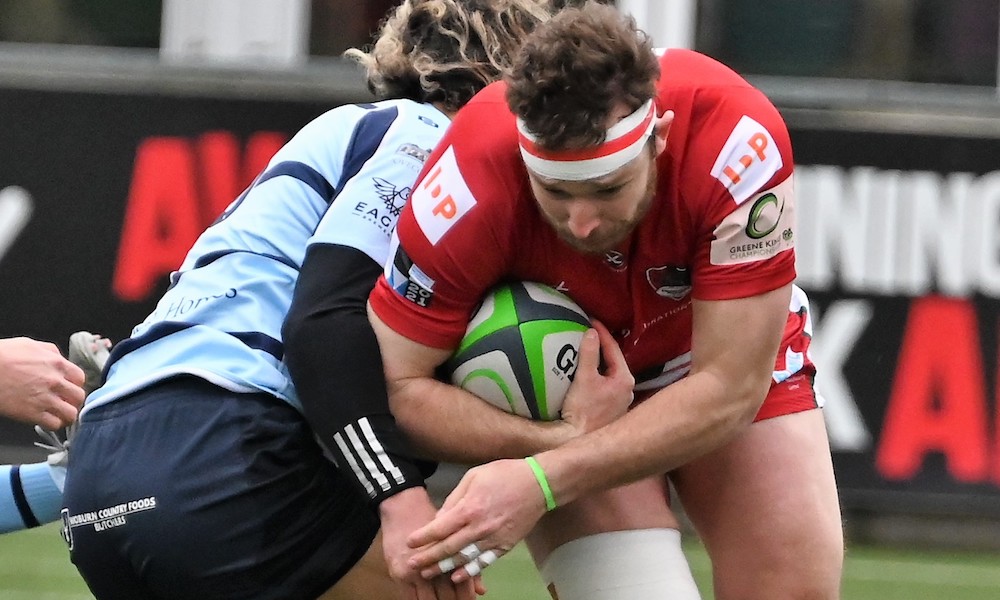 Tony Fenner kept his cool with the final kick of the match as Coventry Rugby ended their first competitive game in almost a year with a Greene King IPA Championship victory over Bedford Blues.

Fenner’s nerves held when captain Ryan Burrows pointed to the sticks after five minutes of constant pressure on the visitors’ line had seen four penalties kicked to the corner.

But this was a contest plagued with handling errors and penalties. Neither team really took the reins and were able to implement their respective game plans. There proved to be very few quality scoring opportunities, with Nic Dolly going over for the only try and Bedford’s Connor Tupai denied by a last-ditch Rob Stevenson tap-tackle which prompted a fumble from the youngster as he dived for the line.

Off the back of a promising pre-season Coventry looked to start the season-proper in positive fashion. But there was an early change with Adam Peters making way for Alex Woolford, and it took some time for the hosts to adjust.

Coventry were awarded a free-kick from the first scrum and opted to contest again showing their intent to dominate this part of set play. But in a taste of what to come the attack this sparked ended with a fumble in midfield.

The first quarter of the game lacked any real fluidity, with handling errors from both teams making the game very stop-start. From one of the many scrums, Coventry attempted to use the pace and power of winger Rob Knox, who made some decent yardage before being forced into touch.

The game saw some life following a break from Tupai, but a scrambling Coventry managed to get over the ball, forcing a penalty and allowing them to clear. The home side looked to build some momentum after being awarded another penalty with the Bedford defence straying offside. Coventry’s kick for touch went dead, however, and Bedford regained the ball just shy of halfway.

Coventry were pinged at the scrum and Bedford put the ball deep into Coventry’s 22. The visitors attempted to use their driving maul and eventually got over the line, but the ball being held up in the process.

The first points of the afternoon came at around 21 minutes in via the boot of Bedford’s Tommy Matthews and the visitors led 0-3.

Coventry regathered from the restart and finally got some go-forward ball. Nile Dacres making a break giving a quality offload to the charging Ryan Burrows. From the breakdown the ball was quickly shifted to the wing and found Rob Stevenson who got five metres from the Bedford try line before the ball was spilt at the ruck.

A few infringements from the home side saw the Blues clear, and when Rich Lane put Tupai in the clear the visitors should have been in front, and the youngster’s disappointment was palpable.

There was worse to come for the scrum-half, who saw yellow before the break for a dangerous tackle on Will Owen, but it was Bedford who ended the period – which sandwiched the interval – three more points to the good, Matthews landing his second penalty four minutes after the resumption of play.

Ten minutes into the second half, Coventry enjoyed one of their most dominant spells of the game, kicking to touch after Bedford were penalised from holding on. Dolly threw accurately to his target and Coventry were able utilise their driving maul to good effect from the first time all afternoon.

The try, and some timely replacements, gave Cov a visible boost, but Bedford not only held firm but created the next opportunity, the powerful and eye-catching Elijah Niko cutting a line against the defensive drift to go close, the centre’s offload going forward in a Pete White tackle.

White and Fenner were linking well, playing quicker from the breakdown and distributing down the back line to good effect.

Through the final quarter the home team enjoyed some somewhat decent possession but Bedford were equally sound in their defence, patiently waiting from an opportunity to turn the ball over, which came late on as they were awarded a penalty as Coventry failed to release at the breakdown. Ex-Coventry fly half Will Maisey nearly proved to be the thorn in his former teams’ side as he slotted a penalty from distance to put the visitors 7-9 up with time running out.

But there were still enough minutes remaining for Coventry to launch one final siege, Bedford to have a third man yellow carded, and Fenner had the final word.