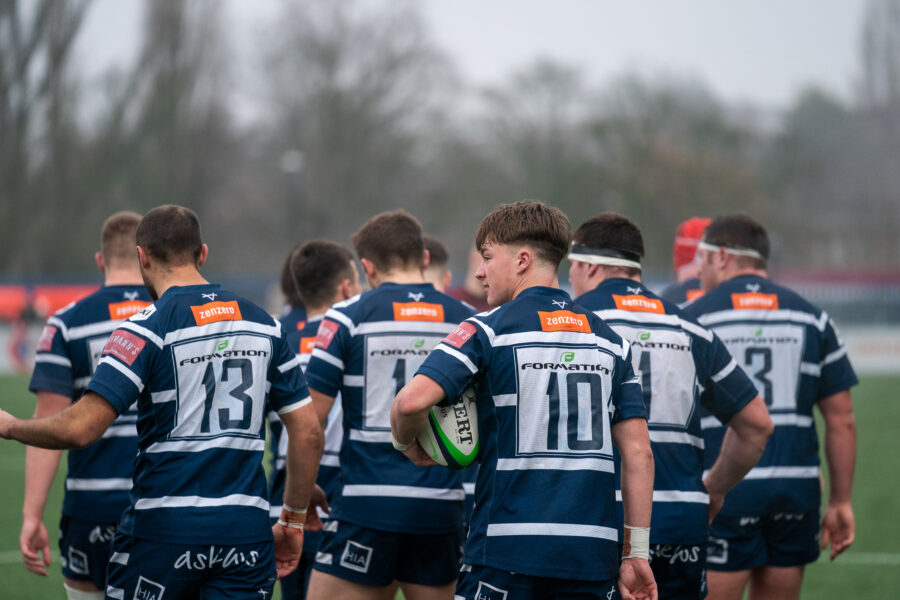 Director of Rugby Rowland Winter disclosed that the team had a “really disruptive week” in terms of injuries and Covid. With a young team on the field and many still fresh back from injury, it seemed that Cov’s game got off to a start as shaky as their week.

Ampthill got into their attacking strides from the whistle and claimed most of the possession in the first twenty minutes. Only five minutes into the last game of the year, a high tackle in midfield provided Ampthill with an early chance to get ahead – but to the relief of the Coventry faithful watching from the stands, Russell Bennett missed the opportunity.

The scrums proved to be an issue for Coventry in the first period. Three scrums led to three scrum penalties; the last of which Bennett turned into three points 10 minutes into the clash.

Coventry had redeeming qualities in the first quarter – the brightest moment came from a neat tip on from Will Owen to Andy Forsyth who broke down the centre of the pitch, but an intercept from Ampthill’s full-back Thomas Hudson saved the day for the visitors, who then went on the attack down the other end.

The Bedfordshire side – now deep into the Coventry half, forced a strong effort and went onto claim their first try of the afternoon. After a big drive from the pack, it was Jack Dickinson who pinned the ball over the line in the 22nd minute of play but only claimed an extra five points after Bennett failed to land the conversion (8-0).

Just six minutes later, Jac Arthur got Ampthill’s second of the game after another big drive. This time Bennett’s conversion was good and the side was 15 points ahead.

With the game looking a very similar story to when Coventry played away at Ampthill’s ground in Round 2 of the Championship, Coventry’s response came in the form of Fred Betteridge following some brilliant patience on Ampthill’s 5m line. Evan Mitchell’s attempt at the extra two points hit the post and the two teams left the first half with a score of 5-15.

With a steep hill to climb in the second half, Winter explained that the team recognised the errors they had made and the 10 or so penalties they had given away. “We just wanted to keep the ball, change tactically what we did a little bit with the kicking point of view and make sure that we took the game to Ampthill and make them work hard for everything.”

Winter’s words seem to have resonated with the team as it was Cov that had the first word in the second half. Following a few attacking phases, Coventry was awarded a penalty for Ampthill not rolling away. Cov kicked to touch and a lineout ensued on the visitors 5m line. Young Fred Betteridge was hungry for another and rolled around the left of a driving maul landing another try for Coventry that afternoon. Mitchell helped to close the gap to 12-15 with his conversion.

Around six minutes later in the opposite corner, Coventry came knocking only 5 meters out. The pack drove forward and Cov looked good for another, however, Ampthill was penalised for coming in at the side. Another line out in the same place proved successful this time and Will Hurd crashed over for victory. Michell perfectly placed the ball through the posts and Coventry took the lead (19-15).

A strong carry from Ryan Burrows sent the Blue-and-White’s charging from halfway. The ball shifted down the left line and James Martin was pinned at the left-wing. Ampthill beat Coventry to an attempted grubber kick and sent it down the other way. Coventry managed to repossess the ball but another interception sent Ampthill charging down their right-wing and back in the lead (19-22).

With only 17 minutes left to play, it certainly wasn’t one for the weak hearted. Describing the closing quarter as an emotional roller-coaster would be an understatement but Coventry’s desire to win that day was evident. The pack moved slowly but steadily towards the try line as Ampthill’s defence remained strong if a little ill-disciplined. This resulted in a series of attempts before the ball found its way over the line in the hands of Jonathan Kpoku – but astonishingly, the try was disallowed with the ref citing a knock-on.

The final 10 minutes left no fingernailsintact in the entire stadium. 72 minutes on the clock, Ampthill’s Austin Wallis was spotted offside and was sent off to the sin-bin. A few minutes later, Cov kick to the corner and was very much in ‘last chance’ territory. With the lineout taking place just in front of the 5m line, the Blue-and-White pack drove hard and Kpoku was successful this time, scoring the bonus-point and game-winning try. Mitchell added the cherry on top with his conversion.

With four minutes left on the clock and only 4 points behind, Ampthill was going to go down without a fight. Now in Coventry’s 22 and recycling the ball well, Ampthill’s ill-discipline reemerged and was penalised for not rolling away. With a second left on the clock, Evan Mitchell kicked the ball over the stand as the ref blew the final whistle. Full time 26-22.