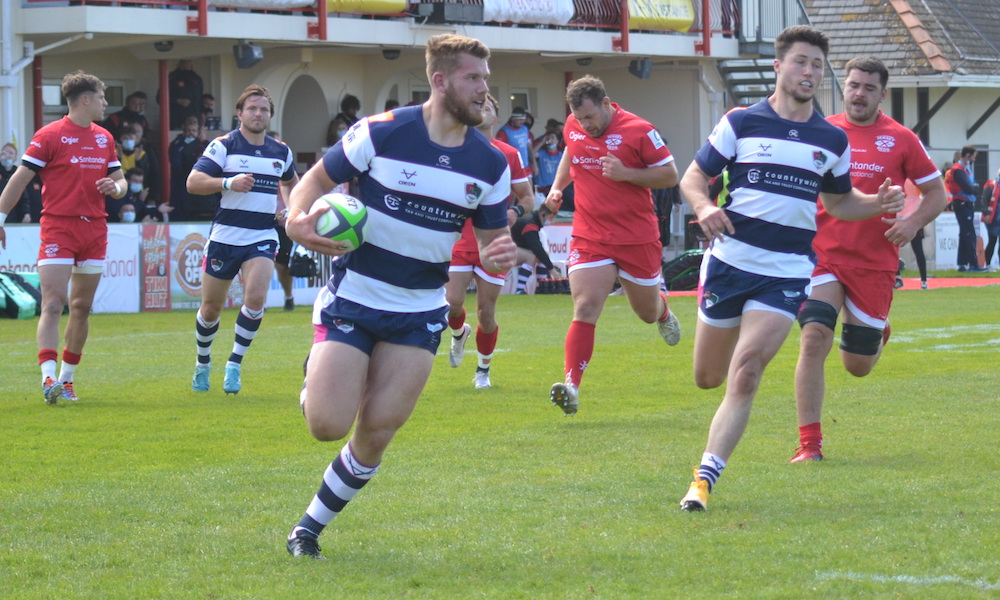 Coventry put in the performance of the season to secure an impressive bonus point win at a sunlit Stade Santander International.

Jersey had headed into the game on the back of a two-match winning streak, and for long periods in the first half they were playing with visible confidence, setting up powerful driving mauls and running some dangerous lines.

Their tactics were certainly straight from the ‘playing into the strong wind’ playbook, but while they came close to the Cov line on several occasions the visitors’ rearguard was more than up to the challenge.

The effort on the back foot was rewarded by the opening points of the game, and while the score came somewhat against the run of play it was nevertheless a candidate for try of the season.

Tony Fenner found Ryan Burrows in open spaces, and the skipper showed both skill and awareness to draw the final man and give the scoring pass to Butt.

It took 15 minutes for Cov to extend the lead, Fenner adding a penalty to his earlier conversion, but the visitors should have been further in front by then.

Rob Stevenson showed little rust on his return by stepping out of two tackles on a scything run to the whitewash, the winger held up over the line. Adam Peters was on his shoulder for the final drive, and he, too, was denied, fumbling the ball in a tackle after quickly tapping a penalty.

The only Achilles’ heel was the lineout, where the wind was causing havoc. Mind you, Cov were giving as good as they were getting, winning a fair few throws against the head.

Still, the Reds would have been happy with a 10-point deficit going into the break. So Butt’s second was certainly crucial, the centre strolling over unopposed after a Joe Snow tap and repeated charges from the forwards had drawn in the home numbers with Max Green in the sin bin, Fenner maintaining a perfect record from the tee with the conversion.

Jersey did get onto the scoreboard early in the second half, Brendan Cope landing a penalty with Green still off the field. But this was sandwiched by two more tries from Butt, both of which were set up by back rowers down the right wing.

Ben Nutley was the key man in the first and Peters the second, and even though Fenner found kicking into the wind substantially harder into the wind than with it Cov nevertheless had a more-than-handy 24-point lead with half-an-hour to play.

Cov hit the 30-point mark just before the hour with another score that was out of the top drawer.

Pete White, on for Snow, spotted an overlap down the blindside inside his own 22. Nutley was in support, drawing the man to find White on the inside, and when the scrum-half did the same to put Sam Aspland-Robinson into space the winger had the clearest of runs to the whitewash.

Fenner’s conversion was straightforward, and with a 31-point lead Cov started to ring the changes, Kai Owen on for his debut, youngster Evan Mitchell given some time at 10 and Rob Knox making his 150th first team appearance.

They had to make an impact on the back foot, Jersey setting up camp deep in the visitors’ 22. But the defence was again up to the challenge, and in one passage of play forced the hosts from the try line up to and over the 22.

With 10 minutes to play there was still plenty of time for some action. Aspland-Robinson was yellow carded for a deliberate knock-on, Cope finally crossed the whitewash for a consolation try, and Jersey had a potential scoring position ruled out by a forward pass.

Even that would have been too little, too late, and Cov ran out the clock to set up next Saturday’s Greene King IPA Championship clash against Saracens with smiles on their faces.