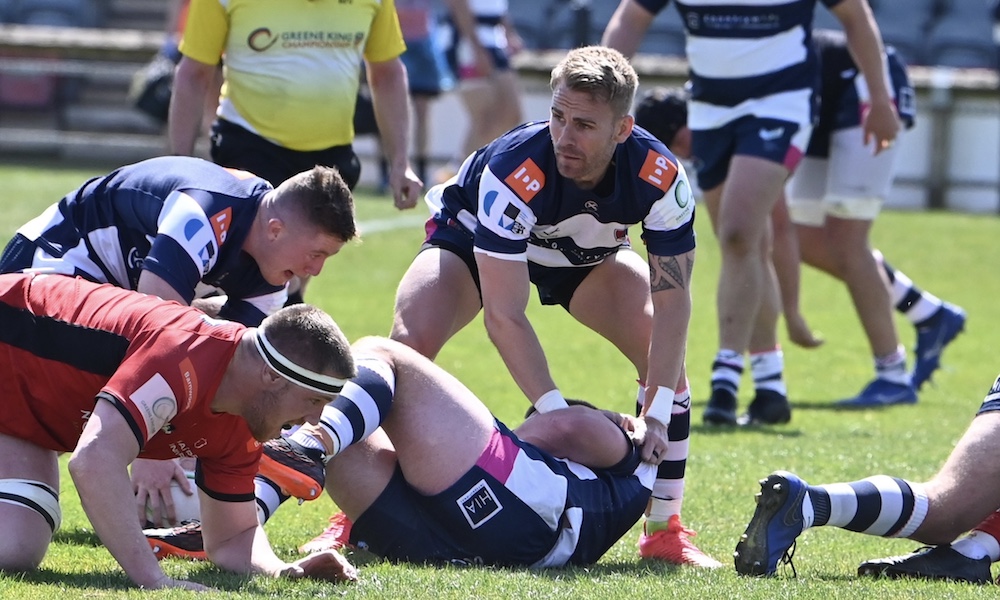 Down to 13 men at one point and trailing 17-12 just before the break they might have been, but Coventry still made it three bonus point wins in the Greene King IPA Championship for the first time with a scintillating second half which saw off a dogged challenge from Hartpury.

Cov came flying out the blocks to take an early lead. The strong wind at the visitors’ backs showed with an Andy Forsyth hack which flew 40 metres downfield, but after that it was quickly tapped penalties from Joe Snow and Ryan Burrows which put Cov into the red zone.

Snow’s break took him 30 metres downfield, and after Cov were held up over the line while playing with an advantage Burrows took the initiative to tap again. Jordon Poole was first to the breakdown and got low to crash over.

A few minutes later Cov were close to a second, Rob Knox twice involved in getting play into the home 22. With Tony Fenner looking to spread play wide and Will Butt showing his power Cov had all the momentum, only for the ball to rebound off a foot at a ruck at the crucial moment and rescue the hosts in the process.

Then on 13 minutes Knox was an arm’s length away from an interception which would have taken him to the line unimpeded, and at the end of the first quarter Burrows tapped a pair of free kicks and a penalty.

But despite all the intent Cov were not able to turn the pressure into points, and Hartpury were still in the contest, even if they were struggling to get out of their own half in the face of the strong breeze and stronger defence from the blue and whites.

The home line was finally breached as the clock ticked into the second quarter. Cov got onto the front foot at a maul, and while Hartpury managed to slow things down there was enough space for Poole to come through the middle, draw the final defender and pop the ball off to Burrows for the try.

It was no less than Cov deserved, but the margin was back to single figures almost immediately as Robbie Smith scooped up a loose ball at speed to race to the posts. With James Williams adding the extras Hartpury had landed a sucker punch, compounded by a yellow card shown to Sam Aspland-Robinson for a dangerous tackle as the last defender.

Williams landed a penalty on the half-hour and all of a sudden, from having been on the back foot for so long Hartpury had their chests puffed out and were bossing the play. A yellow card shown to Cameron Jordan reduced Cov’s manpower even further, but it was the quick thinking of Toby Venner which put Hartpury in front for the first time, the scrum-half tapping a penalty too quickly for the visitors’ defence to recover in time to dot down untouched.

Cov may have been down to 13 men and rocked by those 17 unanswered points, but they finished the first half with the fillip of seven points from Fenner, the fly half finishing off an attack in the corner before curling the conversion in off the left hand upright.

The visitors began the second half with the same intent they had showed in the first, Senitiki Nayalo nearly finding Forsyth with a miracle offload and Luc Jeannot held up after some rapid, powerful and accurate phase play took Cov to the line.

The attitude was rewarded by Nayalo, who crashed over for the bonus point try eight minutes into the half, with Fenner adding the extras to take the lead out to two scores.

By keeping the ball in hand Cov were taking the wind out of the equation, Aspland-Robinson and Louis Brown running play back with interest regularly.

However, when the hosts landed another sucker punch, Williams sending an outrageous dummy before sending Venner over for his second, we were back to a two-point ball game with 20 minutes to play.

Any nerves there may have been were calmed with two tries in four minutes from Sam Lewis which put the contest beyond the hosts.

The first was an absolute peach and the try of the day from the visitors, offloads from Ben Nutley, Pete White and Adam Peters putting the replacement over by the posts. The second came after Tom Doughty and James Martin were brought down by desperate tackles in the left and right corners respectively, Lewis finishing things off with a powerful run onto a pop pass.

Jordan made amends for his first half sinbinning with Cov’s seventh, and while Hartpury did finish with a bit of a flourish the visitors were flying all the way to the final whistle.