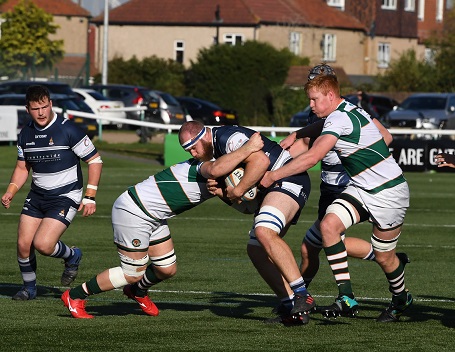 The business end of the season really is upon us now, with this weekend’s round 18 visit of Ealing Trailfinders being the penultimate Butts Park action of the campaign.

And after an extremely unpredictable round 17, much excitement surrounds this weekend’s matches.

With Cov failing to achieve a much sought-after first away win on a wet night at London Scottish, results elsewhere conspired to such an extent that just four points separate the seventh-placed Blue-and-Whites and Yorkshire Carnegie, who following their fine win over London Irish now occupy tenth.

Saturday’s visitors Ealing Trailfinders found themselves on the wrong end of a narrow defeat in their London derby with Richmond in the last round of action. London Irish, who played 24 hours later, must have surely have seen the establishment of a 13-point margin at the top as highly probable – but it did not work out that way.

Second-placed Ealing therefore travel to the Butts Park with an eight-point deficit following Irish’s shock defeat in Leeds, but sure in the knowledge they cannot allow any further slip ups.

From a Cov perspective, a third-ever win over Saturday’s visitors is also now essential if their hopes of a top six finish are to remain alive as the season enters April.

The West Londoners arrive on Saturday with an overall league record showing 13 wins from 17, five of those being achieved on the road at London Scottish, Doncaster, Hartpury, Yorkshire Carnegie and Cornish Pirates.

The long serving Ben Ward remains director of rugby, a role he took on in 2014 having been with the club as a player and coach since 2004.

Last summer Ealing had the largest turnover of the players in the Championship, although somewhat ironically, it is four of last season’s squad who lead their points tally. Full back Peter Lydon has 124 league points to his name, winger James Cordy Redden is currently top try scorer with 11, followed by back row forward Rayn Smid on eight and hooker Alun Walker with seven.

A name new to the Trailfinders squad this season is lock forward Jordan Onojaife who in season 2014/15 appeared 13 times in a Cov jersey, whilst dual registered from Northampton Academy. After a period on loan at Bedford Blues Onojaife signed for Ealing in the last close season.

In the opposite direction, Cov’s loose head prop James Gibbons made the move north from the Trailfinders in the summer, having been with them since 2016.

The record of matches between Cov and Ealing is relatively recent with this Saturday’s game just the eighth overall.

All prior to this season have taken place in National One, the first being in season 2011/12. Both Coventry wins have come at the BPA, the first time the clubs met and on the occasion of Ealing’s last visit in 2014/15.

Fresh in the squad’s mind however will be the 60 -25 Championship defeat suffered in the earlier fixture back in October, which increased Ealing’s overall winning tally to 5-2.

Advanced tickets for this Saturday’s IPA Greene King Championship clash with Ealing, preferentially priced at £18 (seated), £15 (standing) and £2 (ages three to 16) are available before 4pm on Friday from the Butts Park Arena ticket office on 02476 231001.