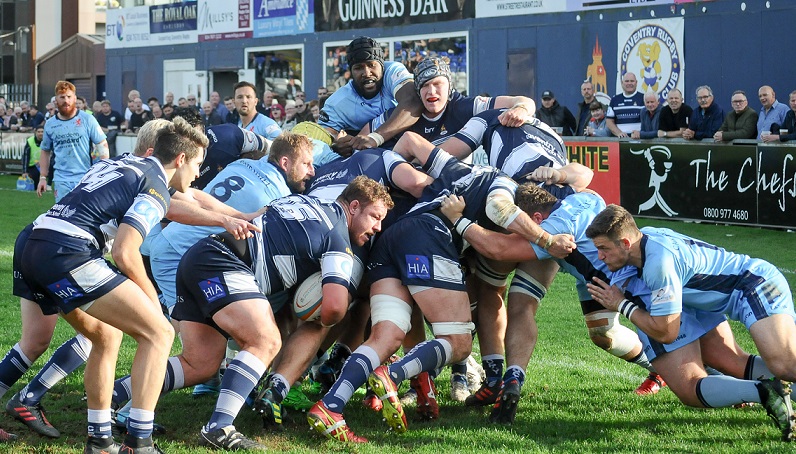 Scott Tolmie on his way to the line for Cov against London Scottish in October (pic: Nick Meredith) words – John Butler

Hard on the heels of the battling win over Richmond last Saturday, this coming Friday evening Cov make the journey south to take on the co-tenants of the Richmond Athletic Ground, London Scottish for the first time since the 2010/11 season.

The present squad do not have particularly happy memories of the venue since it saw probably their worst performance of the season against Richmond in October.

On a more positive note, the next week saw Cov host London Scottish at the BPA and battle their way to a 29-27 win in a match featuring nine tries, five of them to the hosts.

Cov’s hosts on Friday evening have endured something of an up-and-down time this season, securing six wins to set against 10 defeats. Nottingham, Hartpury and Jersey have all been beaten at the Athletic Ground, while Scottish also very significantly recorded a league double over the Reds when they visited Jersey. Most recently though Bedford Blues left Richmond with a 35-17 win.

Scottish go into the game on the back of 21-52 reverse away at London Irish last Saturday, match reports suggesting they were pretty soundly beaten by the Champions elect.

The Exiles’ director of rugby is former Loughborough Students supremo Dave Morris while Nic Rouse, once of Rotherham Titans, is head coach – although it has been reported recently that he will be leaving at the end of the season.

One direct link to Cov in the home squad is prop forward Jimmy Litchfield, who has so far made 25 appearances for Scottish since leaving the BPA at the end of last season.

Fixtures between the clubs have been somewhat sporadic over the years due to differing league status. In addition, Scottish were also forced to re-build from the bottom of the pyramid alongside the Richmond club following both being demoted by the RFU, which meant there were no fixtures at all for thirteen seasons between 1998/99 & 2010/11.

Prior to the meeting at the BPA earlier this season, there were two matches in 2010/11, Scottish winning both.

Overall, this week’s meeting will be just the 13th at league level between the two clubs, currently London Scottish leading by six wins to five, with one match drawn. Cov have won twice previously on the Athletic Ground in a league match.

For those Coventry supporters looking not to take on the London rush hour, the hard working Supporters’ Club are laying on a coach, which is scheduled to depart from the BPA at 4.15pm. Bookings can be made via email before 1.00pm on Wednesday via CRSC1874@gmail.com .

Supporters not travelling can keep themselves fully up to date by following live commentary through BBC Coventry & Warwickshire on line via the BBC Sport web site. Kick off is 7.45pm.