Kailus steps up for Park test

The Coventry-born 20-year-old gets his chance after some strong performances for the Development side and starts at blind side flanker as the league champions bid to extend their winning home run, stretching back to October 2016, to 25 games.

Hutchinson (pictured)comes into the 20-strong squad at the expense of Brett Daynes as one of two changes from the one that won at Plymouth Albion last time out two weeks ago – scrum-half Pete White, who missed that game through illness, returning on the bench for Ben Palmer. 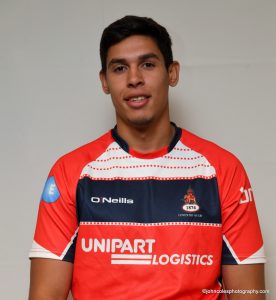 The starting backs are unchanged, while in the forwards Luke Narraway comes off the bench at No.8 for Daynes and, after an outing at 6, Nile Dacres reverts to the second row with Tom Jubb going to the bench on rotation.

Hutchinson joined Cov last summer from Worcester Academy after experiencing National League Two rugby with seven games on loan at Luctonians, and has also had one loan game at Chinnor this term.

“This is a good opportunity at home to give him a chance, which he’s earned.”

Cov ran out 43-13 winners when the two sides met at Roehampton in early December, but it was only in the second half that they asserted any real authority after a strong start by Park.

Said Winter: “This is another really tough game. Rosslyn Park are still not mathematically safe from relegation, so they have plenty to play for.

“They’re a side that’s under-performed this season – they have a very talented group of players and should be up towards the top end of the table rather than where they are now.

“But we’re focusing very much on ourselves, and I think the boys are really looking forward to being back at Butts Park in front of a home crowd.

“It will be the first home game since they were crowned champions and they’re excited by that – they want to out on a good show.”

Kick-off is 3pm and live post-match entertainment in the Jon Sharp Bar will be by Big Wednesday.

Back row pair Waita Setu and Olly Povoas make their return from injury along with centre Joe Lane in the Development side for their Zoo Sports Shield game against Cinderford United at King Henry V111 Sports Ground, Highway (1pm).

ROUND 27 sees some intriguing fixtures which could go a long way in defining the last two relegation places. Still with a game in hand, Rosslyn Park travel to Coventry Rugby requiring a win to ensure their survival.

Third-placed Ampthill & District play host to second-placed Darlington Mowden Park. A win for the home side could bring them within one point of Park and give them hope of securing their highest-ever NL1 finish. A game which could go either way.

Hull Ionians have perhaps their most important game of the season at home to fourth-placed Plymouth Albion. In their attempt to escape relegation, Ionians are now only three points ahead of Loughborough Students having played one game more. The home side can be a difficult proposition at home, but they will not be favourites for this one. Another home defeat for Ionians could seal their fate, so a nervous afternoon for them on Saturday.

Hoping for such a defeat will be Loughborough Students. who are three points behind Ionians with a game in hand but face a tricky visit to Esher. The home side were close to beating DMP last week and, back at home, will be slight favourites to win as they themselves are not yet safe from relegation. A close and nervous encounter with Esher probably just shading it.

Cambridge, in ninth place and still not safe themselves, travel to fifth-placed Blackheath in search of another crucial win after last week’s victory. They will be confident of getting something out of this match, but another close one to predict.

A battle over sixth place sees present incumbents Old Elthamians travel to Birmingham Moseley, who are only one place and two points behind them. Form has recently been in favour of the Midlanders and if they win this one it would take them above OE into sixth. A home victory is on the cards.

Relegated Fylde, with only pride to play for, travel to Bishop’s Stortford side who will be buoyant after last week’s win over Blackheath. At home Stortford should be too strong and a win for them could even propel them into sixth place.

Old Albanian, in 15th, are at home to tenth-placed Caldy. Both sides require the win, Caldy to make sure of safety and OA to keep their chances alive for at least another week. The home side may be boosted by Saracens players which makes the game difficult to predict, but Caldy have enough firepower to win this one and ensure their first year survival in NL1.