Heath’s happy to be home

CENTRE Heath Stevens has seen his senior rugby career go full circle with his return to Coventry – and after an eventful three and a half years away from Butts Park, he is happy to be back on familiar ground.

The 24-year-old, who made 79 National League One appearances over three seasons in his first stint at Cov before stepping up to the Championship, was a victim of the liquidation of London Welsh at the start of December.

As one door closed, however, another door opened, and when the chance of a move into coaching and teaching at St Paul’s School in London, while continuing to play at Coventry, arose it was too good to pass up for Stevens, who had a brief spell at Jersey Reds after leaving London Welsh.

“A situation like that makes you re-evaluate what you want in your life,” said Stevens, who has signed a two and a half year contract with Cov.

“I played a couple of games for Jersey, but with the future in mind, the opportunity to come back and start a career in something else and supplement that by coming back to Cov was something I couldn’t say no to.

“I’d lost some of the enjoyment after London Welsh, I was pretty gutted about the whole situation – I was loving my time down there with some good coaches and playing pretty good rugby outside a player like Joe Carlisle who puts you on the front foot as a 10.

“But it leads to different things, and I can look back at a good time down there and take positives from it.

“It’s about kicking on now, I just want to play as much as I can for Coventry and I’m enjoying being back.

“There are some familiar faces – Daynesy, Pooley – and I’ve played against quite a few of the other boys over the year. Nothing too much has changed, although everything seems more professional and better organised – it’s just nice to be back, really, and settled down.”

After re-signing in the middle of last week, Stevens made his return to playing in a Blue & White shirt a little bit sooner than expected, coming off the bench just 13 minutes into the game at Fylde when James Stokes was injured.

“It put me straight back into it, but that’s the way things happen and it was probably the best for me,” he said.

“I was lucky enough to get over for a try and – apart from the final result – everything was fine. Most teams play a similar sort of rugby, it’s just the calls and reacting to different people and how they play.

“That will come with time, it worked pretty well, and I just need to work on a few things.

“We went 24-12 up and really needed to batten down the hatches and close the game out, but I think we tried to play a bit too expansively when we didn’t need to and should have put all the pressure on Fylde to make them play out.

“We knew Fylde were dangerous from all areas of the pitch, they’ve always been the same, and we should have dealt with that.”

Stevens left Cov at the end of the 2012-13 season to join Plymouth Albion – then in the Championship – and is looking forward to returning there this Saturday.

“If it’s anything like I remember, the pitch will be awful. It will be a battle, but hopefully we can get a good win and get back on track.

“I had a really good year there, they played some good rugby under James Shanahan and personally I developed pretty well, which gave me the opportunity to then go to Worcester for a couple of years.

“It didn’t quite work out up there, I had a major injury straight away and didn’t really get a chance to have a go after that, but it was good to be a part of it and I wouldn’t have got the opportunity if I hadn’t gone to Plymouth.”

As well as helping Cov to build and move forward next season, Stevens – who first worked with director of rugby, Rowland Winter, when playing for East Midlands and Midlands Under-20s – will be targeting his century of appearances.

“I definitely want to get to 100 games, it would be nice to achieve that and then push on from there,” he said.

“I’m working in the rugby department at St Paul’s, doing some coaching with the first XV and some of the other teams within the school, and it all fits in with Cov’s training structure and works well.

“Hopefully everything will go to plan.” 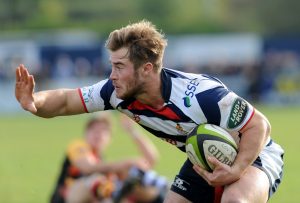