COVENTRY came from 17-0 down in the first half to secure a second successive Zoo Sports Shield victory, scoring seven tries against Esher’s second string.

Dominating the set plays, Cov took time to get into a rhythm but asserted their authority to lead 21-17 at the break before pulling clear with four tries in the final 25 minutes as their fitness came through in open play.

Cov fell behind to a penalty after five minutes and, after defending well against a five-metre line-out, they then conceded two converted tries in the space of five minutes.

The tide turned when Scott Tolmie went over for a try, converted by Ben Palmer, with Esher down to 14 men following a yellow card, and a converted Harry Morley try and penalty try sent the visitors into half-time in front.

Esher regained the lead with a converted try midway through the third quarter, but Cov responded with a three-try burst from Kwaku Asiedu, Palmer and James Neal (pictured), two converted by Palmer for a 40-24 lead after 65 minutes.

The home side pulled one back, but Cov fittingly had the final word with Asiedu going in for his second try and Palmer converting to complete the scoring. 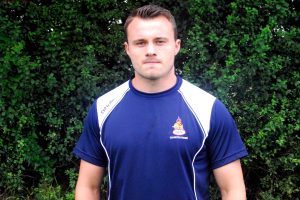