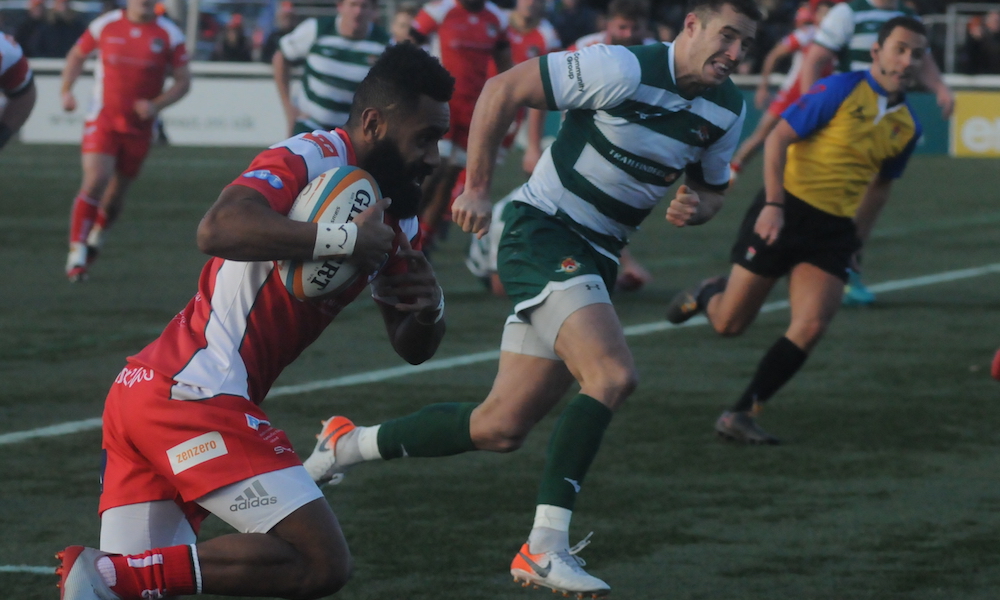 Coventry Rugby had their most disappointing afternoon of the season so far at Trailfinders Sports Ground against an Ealing outfit which consolidated its place at the top of Pool 1 and confirmed a home Championship Cup quarter final in the process.

Three tries in five final quarter minutes may have put a gloss on the final scoreline from an Ealing perspective, but in the cold light of day the Trailfinders deserve plenty of respect for the way they dominated from start to finish.

Cov did have their moments, Henry Purdy combining with Max Trimble nicely a couple of times, a few promising positions created with both ball in hand and from the boot, and Tony Fenner and Andy Bulumakau capitalising on turnovers in the first half to score.

But overall Coventry were second best across the field and will now face an away trip when the Cup resumes for the knockout stages in February.

Ealing had begun the previous two clashes this season in flying fashion, and they repeated this once again. Andrew Durutalo was their main focus of their first attack, hitting a short line to make the initial burst. A penalty was kicked to the corner and when the maul sheared off Jordy Reid had a stroll over the line to score with only a couple of minutes on the clock.

Coventry had the perfect riposte, Fenner the beneficiary from a kick ahead when the men in red forced a fumble as Ealing tried to run the ball from deep.

But while this showed the visitors’ potency when given an opportunity, all too often the ball was hitting the deck in close quarters to hand possession back to the Trailfinders, ending promising periods of play in the process.

Ill discipline was also letting Coventry down, and with Ealing repeatedly kicking to the corner it seemed a matter of time until they would score again, Duratalo doing the honours in the 12th minute.

A Steven Shingler penalty took the score out to 15-7, but with Ealing then building more pressure and creating an overlap up stepped Bulumakau to pluck an interception and run in from 80 metres.

Ealing replied from the kick off as Coventry failed to maintain control of the ball, Craig Hampson the man over the whitewash. But despite now facing a stiff challenge on the scoreboard Coventry then put together their most fluent attacks of the half.

Purdy counter-attacked and combined with Trimble up the left touchline to take Coventry from one end to the other. Then when Bulumakau won the ball in the air from a Hampson box kick it allowed Fenner to find Trimble with a long pass. He turned on the pace to round the defenders and with Rory Jennings in support Ealing were stretched.

Unfortunately the final pass inside to Pete White went astray and rebounded into touch, and while Coventry were playing the flowing rugby Ealing were putting together the more effective passages of play.

Some outstanding work was needed at a breakdown on the Cov 22 to end a dangerous passage of play from Ealing, but the next time the hosts visited the 22 they turned position into points, Tommy Bell latching onto a Shingler grubber to score.

The deficit was compounded by a yellow card shown to Ben Nutley on the stroke of half-time, with Shingler landing the penalty and Rayn Smid scoring after the re-start with Cov still down to 14.

The try summed up the game so far – Nile Dacres had competed at Fenner’s kick-off and won the ball back, but Ealing had pounced on the loose ball to then get over the gain line and work their way to the line for the South African to score.

Around the hour mark the teams exchanged missed opportunities. Cov had a promising position ended by a penalty for back-chat, then Ealing had an interception try ruled out for offside.

Trimble was next to be frustrated, as while Purdy’s grubber bounced up nicely at the crucial moment the ball got away from the winger and he fumbled. This was followed by Hampson’s inexplicable drop over the line, and then some good play from long range from both sides as the game’s structure broke down.

Cov did get on the scoreboard, Jack Ram alert to an overthrown lineout to run in from 25 metres, and with James Cordy Redden having a try ruled out there was still time to get at least one point out of the game.

But when the winger made no mistake the next time he was in scoring position it sparked the five minutes which put the contest well and truly beyond the visitors, as first Jordan Burns and then Kieran Murphy finished off sweeping attacks and take Ealing past the 50-point mark.