AN ever-present for Coventry this season, back row forward Darrel Dyer’s second coming at Butts Park is certainly proving more fruitful than the first.

The 24-year-old spent a brief period 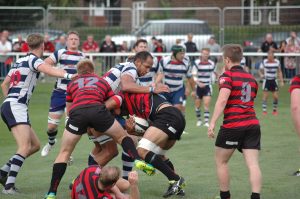 on loan at Cov in the 2011-12 campaign but without a first-team outing before returning to Northampton, from where he went to Bedford Blues and then Ampthill before completing a full move to Cov in the summer.

“I was in the Saints senior academy and a few of us were loaned out to Coventry – I think I played one game for the Nighthawks and that was the sum of my caps!” said Dyer.

Coming back to Cov was, however, an easy decision to make despite tasting promotion from National League Two at Ampthill and then enjoying a strong debut season in National One.

“It was Coventry’s ambition and the hunger for where they want to be – it was definitely the right move for me,” he said. “I wanted to go higher in the leagues, and the full-time environment and the professionalism convinced me.

“It’s a different team, a different experience and challenge, but I’m thoroughly enjoying it.

“From where we started pre-season to where we’ve come to now is a massive step up and all the boys are buying into the system. It’s really fun.”

Dyer is looking forward to returning to Ampthill this Saturday for a fixture that will test Cov’s progress as they look for their fifth straight win.

“I’m definitely excited about going up there and playing if I’m lucky enough to be involved,” he said.

“It’s going to be a massive challenge, especially up front in the forwards. Ampthill are known for being a power team, so we’ve got to match them physically and, basically, attack their weak areas.

Dyer has shown his versatility at blind side, No.8 and in the second row, as well as proving no slouch when asked to go out into the backs.

“I’m a back row or second row. I had a brief stint two seasons ago when I was on the wing, basically it was an experiment, learning a new skill set, and I do think it has helped me as a forward.

“I’m enjoying where I am at the moment at No.8, but if I was to play regularly at 6 I think I would be just as happy, to be honest. Wherever the coach sees me as best for the team, I’m happy – within reason!”

Dyer’s first club was Northampton Casuals, as an 11-year-old, from where he went across to Old Scouts at the age of 13.

“I was there until I was about 16 when I went to Bedford Blues Academy. That was where I got picked up to go to Northampton Saints.

“It’s tough to make it at any Premiership club and eventually I was released. Bedford took me on and I went out to Ampthill for game time, and now here I am at Coventry.

“I would say the majority of the boys here want to go into the Premiership – and for me, it’s still chasing the dream, that’s where I want to be.

“But it’s one step at a time and I’m happy to be here building towards the future. If a really good opportunity came from somewhere else which I thought would enhance my rugby and development, I’d seriously consider that, but for now I’ll be training and working hard to take a few steps forward with Coventry and going back into the Championship with them would be a good scenario.

“It’s hard to expect any team to get promotion in one year with a new squad, but with development over the next season or two, we’ll definitely be up there.

“Rowland Winter knows what he’s on about, the coaches are all experts in their fields, and if we keep getting it right, we can definitely get what we want.”