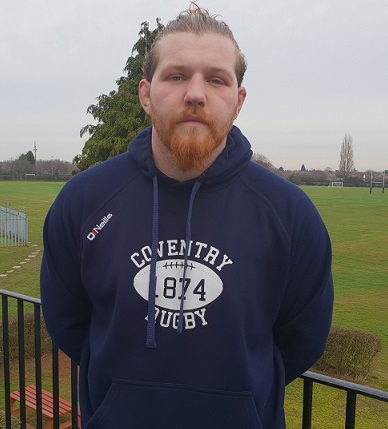 Coventry Rugby announces that Harlequins prop Josh McNulty has joined the club on loan for the remainder of the season.

The 24-year-old, who joins his brothers Isaac and Sam in the blue-and-whites’ squad, goes straight into the selection mix for this Saturday’s Championship Cup fifth round clash with Doncaster (Butts Park Arena, 3pm).

McNulty is a product of Coventry College who also studied at De Montfort University. During his time with Gloucester then Harlequins he featured regularly in the Premiership A League and Anglo-Welsh Cup.

Director of rugby Rowland Winter said McNulty provides an excellent option at tight head, where Luc Jeannot’s shoulder injury now seems likely to keep him off the field for the remainder of the campaign.

“We now know Luc is having shoulder reconstruction in mid-December, and in all probability won’t be back until pre-season,” Winter advised. “He’s had niggles there for a while, and it is now at the point where he needs surgery.

“Josh is a Cov lad who had a few games here before going to Worcester academy then Gloucester.

“He’s now been at Harlequins for 18 months, but with the likes of Kyle Sinckler ahead of him needs some game time which we can give him.

“I’ve known him four or five years, and he played in a Midlands U20 side I coached when he was at Worcester.

“He’s a solid scrummager who is also a good all-round player with plenty of energy and work rate. He’s a typical McNulty – they all work hard and like the physical side of the game.”

Cov have also confirmed that Jeannot and lock Nile Dacres have been joined on the long-term injury list by another second row, Kailus Hutchinson, and scrum half David Brazier.

Hutchinson needs reconstructive surgery on his shoulder to correct damage suffered against Canada, while the former Moseley No.9 has aggravated an old knee injury while on loan at Chinnor, and also requires an operation.