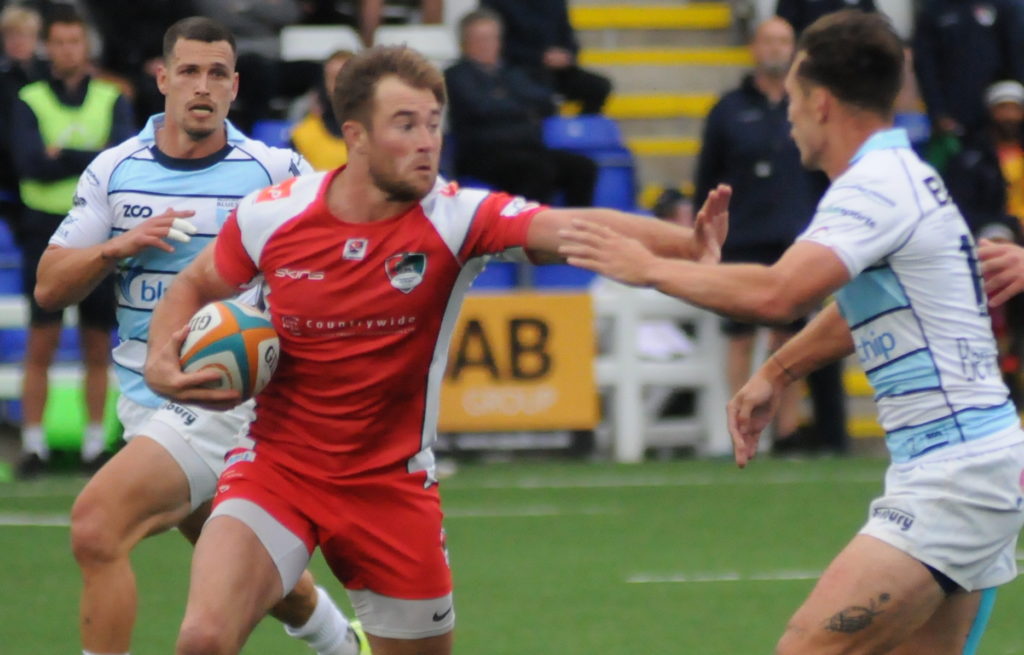 Coventry Rugby continued the winning start to the season after another game of two halves which caught fire as a contest after the break.

Within a minute Cov looked for all the world to be on their way to an opening try, Max Trimble coming off his wing way over to the right to make the extra man. But when he opted to pass the ball fell behind the supporting James Stokes and Bedford cleared.

Trimble had another break less than a minute later, scything through the midfield defence. Rob Knox was the runner on the outside this time, but before the pass could be made a blue shirt scrambled and forced a fumble.

There was another strong chance in the opening seven minutes. Ryan Burrows made a break with Knox in support. Ed Coulson made the all-important tackle to stop the try, but with Coventry retaining possession Burrows, Andy Bulumakau and Gareth Denman all came within close sight of the whitewash.

Instead Cov had to settle for a Rory Jennings penalty to open the scoring, but it was not long until they were back deep in Bedford territory.

Bulumakau had another break, ducking underneath a high tackle to go into space and into the 22. It was unfortunate that the ball was spilled when play came left, but even more so to see the winger down in back play. He ran off, replaced by Heath Stevens, and the centre had an immediate impact, putting his team into the position from where Jennings would eventually kick a second penalty.

It had been all Cov in the opening 10 minutes, but they had not had the points their approach play deserved.

Bedford had barely even got into the home half, so their opening penalty in the 17th minute from Coulson brought a flattering gloss to the scoreline as far as the Blues were concerned.

Jennings scored a second, Coulson missed his next shot, and then Cov were back on the attack, backs and forwards all getting their hands on the ball.

Bedford may have had their backs against the wall for much of the first half, but with their first attack of the second they headed back to halfway with the full haul, Dan Temm scoring the try and Coulson the conversion.

Coventry finally got over the whitewash after 51 minutes, Darren Dawidiuk driven over after a pair of penalties were kicked to the corner.

But before the hour Bedford were back in front. Temm continued to be their main man with a break and then a couple of good offloads, but it was the rest of the pack who had their moment for the score, driving hooker Robbie Smith over.

Five minutes later Cov were back in front with a sensational score. Senitiki Nayalo had been on the field barely 30 seconds before he crashed over, but the plaudits should go to Stevens for his 50-metre break that put his team deep into the 22. The pace stayed high, the intensity even more so, and the try raised the roof.

The flurry of tries did not continue in the final quarter, even if the action remained frenetic. Will Maisey added to his conversion of Nayalo’s try with a penalty six minutes from time which both put Coventry two scores in front and finally took the wind from the Blues’ sails.

Maisey missed in the final minute, but the time taken for the shot nevertheless hoovered up the seconds which were left and brought the final whistle in the process.