MAGNIFICENT Coventry march on, moving ever closer to the National One League title they have sought and battled for all season.

A seven-try to one hammering of sixth-placed Old Elthamians was as emphatic as that scoreline suggests. The visitors, in their first season in the division, were, for the second time this season, worthy opponents, but ultimately outgunned and outpaced by another excellent performance from the champions elect, and, this time in front of their own support.

The records just keep mounting up for this dominant squad. Victory was the 23rd of the season, whilst also being the 24th in succession at home since the last defeat at Butts Park Arena in the autumn of 2016.

Seven tries took the season’s tally to a new high of 154, the points tally also reaching 1,018 which is another club league record for a season.

On a personal level, in Andy Brown’s 100th league appearance for the club, James Stokes’s 18th try of the season also took him past the club league record set by Andy Smallwood way back in 1996/97.

An awesome afternoon overall. OEs, to their credit, battled all the way, but ultimately they paid a high price with four yellow cards issued for technical offences in the second half.

Thanks to the sterling efforts once again of head groundsman Eric Richardson, who had worked tirelessly throughout the morning after more heavy rain, the pitch, whilst heavy, stood up pretty well with more rain also falling during the match.

It was to take Cov just two minutes to open their account in front of another excellent 1,473 crowd.

After a close-in scrum, a Will Maisey half break set up Rob Knox for the first of his tries, Maisey adding the conversion for 7-0.

Displaying very clear early intent, Old Elthamians immediately responded, winning two penalties which were both landed by fly-half Joe Carlisle, himself a wearer of the Cov Blue & White some seasons back.

With both centre Sam Tuitupou and prop forward Luc Jeannot leaving the field with injuries, Cov soon had to make changes whilst also moving to a 21-6 lead by the half hour mark as the visitors struggled to contain the powerful home team work.

Firstly on 19 minutes, after Maisey had pumped a penalty deep into the visitors, 22, pressure by the forwards, who were to prove increasingly effective as the match progressed, saw centre and captain of the day Heath Stevens power over, Maisey adding the extras.

With rain now falling, Cov powered back again with more great handling, before on 29 minutes Jack Preece was driven over for Cov’s 150th try of the season, Maisey again converting, this time from a wider angle, for a 21-6 lead.

Try number four and the resultant bonus point, Cov’s 22nd of the season, saw Knox cross for his second of the match, unselfishly fed by Stokes. Maisey’s attempted conversion this time flew just wide, but Cov by now were in charge at 26-6.

A blip was to follow, Preece adjudged to have tip tackled and receiving a yellow card for his efforts. Whilst down to 14 men, Cov were to concede their only try of the game, lock forward Fred Hosking using his strength to cross and Carlisle adding the conversion for 26-13 at the break.

Little was to change after the resumption with Cov again the dominant force. As Preece returned, visiting prop Alex Rogers became the first OE to pick up yellow, Maisey kicking the resultant penalty for 29-13.

Carlisle then picked up a yellow card on 48 minutes as pressure built and built against the visitors, before after 57 minutes, Coventry produced their fifth try – and what a gem it was.

From inside their own half, an emphatic counter was set up, brilliantly finished off by Knox for his hat-trick which also took Cov to 1,004 points for the season and another new record. Maisey converted from a wide angle.

The power overall of the Coventry forwards was now really telling, emphatically seen when the Old Elthamian forwards were driven back at a set scrum.

OE‘s did threaten for a moment in the home 22, but it was not long before Cov sealed two further tries. After 71 minutes, to the delight of the home crowd, Stokes steamed in for his record-breaking 18th try of the season, the attempted Maisey conversion hitting the crossbar, with Cov now well out of sight at 41-13.

Pressure now was totally against the valiant visitors, both replacement Harry Ledger and No.8 Ben King receiving yellow cards, and with the OEs scrum now in complete disarray, referee Matt Turvey awarded Cov their tenth penalty try of the season which really summed up the dominance which had steadily built up.

48-13, with the title and subsequent promotion moving ever closer.

In next week’s rearranged fixtures, Cov travel to Caldy on 114 points. Both the chasing Darlington Mowden Park and Plymouth Albion are also in action, but, following defeats this weekend, both can only reach 119 points for the season.

Any slip up next weekend from the chasing two and a Coventry bonus point win at Caldy could just mean the title might be secured that soon, particularly as Cov have everything else in their favour in terms of number of wins achieved and also points difference. 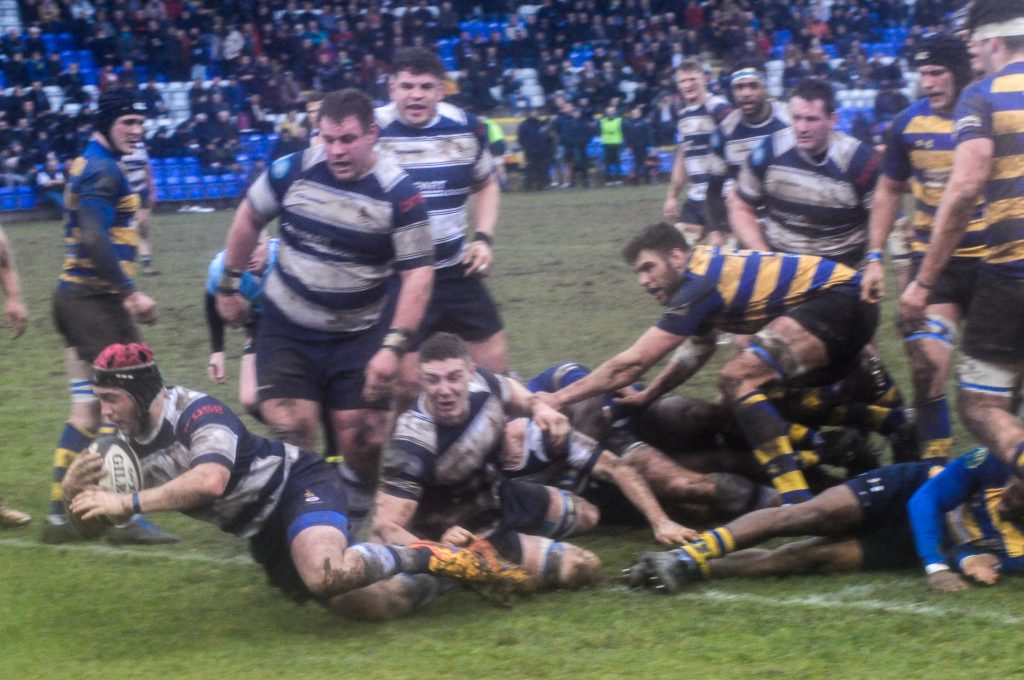