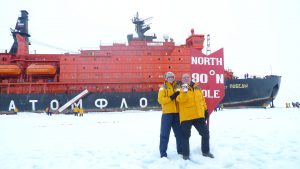 Coventry Rugby chairman Jon Sharp and his wife Emma travelled to “one of the most remote places on this planet,” the Geographic North Pole.

The couple have a fond curiosity in exploration and the outdoors, so when this opportunity arose it was a must for Coventry’s affable chairman.

He said: “I have always been interested in wilderness and adventure, so when this opportunity cropped up it was a simple decision.

“To be able to go to the Geographic North Pole, where only a few thousand people have ever stood, we saw as a massive privilege.”

Sharp began his travel to the Arctic Circle, their journey beginning with a long-haul flight via Helsinki to Murmansk in Russia, “which is the only year-round ice-free port inside the Arctic circle,” Sharp explained.

“Murmansk was the destination for the Arctic convoys during WWII. There we boarded the ’50 Years of Victory’ which is the world’s most powerful ice breaker which also carried the Olympic flame to the North Pole when Russia hosted the winter games at Sochi in 2014.

“It has two nuclear reactors producing 75,000 horsepower and has been refitted to accommodate passengers.

“A brutal machine which soon proved itself as we smashed our way northwards through the pack ice, which we entered at about 82 degrees, after two days crossing the Barents Sea.”

Out of a world population of 7 billion, only a few thousand people have ever been to the North Pole and Sharp began to explain what wildlife was on offer on their route.

He continued: “We saw polar bears on many occasions, caught glimpses of seals and walruses, many sea birds and even spotted whales when in open water.

“The ship has a helicopter which we went up in on a couple of occasions, and we also took zodiac trips (rigid inflatables) to view calving glaciers close up as we passed through Franz Josef Land on the way.”

With the time of year, that part of the Arctic Circle never gets dark and with that in mind, the crew and its explorers were able to set off on early mornings.

Sharp said: “We all assembled on deck early morning as we neared the Pole. The ship was encountering ice up to 2 metres thick, plus pressure ridges much thicker and on several occasions had to back up and ram repeatedly before breaking through.

“At this time we were barely making three or four knots – the skipper said the ice was the thickest for years, which is encouraging news for the environment.

“People were using hand held GPS devices and the excitement grew as they registered 89.999 degrees N, before a blast on the ship’s horn and cheers when the magic 90 degrees N was attained at 06.20 on 30th June.

The couple managed to organise the first-ever rugby match played in freezing conditions at the North Pole with Coventry Rugby being well represented at the top of the world.

“The ship was then fixed to an ice flow and we disembarked to spend the day there. A satellite phone was available for our use and our kids were astonished to receive a call from the top of the world.

“Clear water was established at the stern of the ship and the more hardy took ‘the polar plunge’, my wife amongst them.

“There were a few rugby fans aboard and we then organised the first ever game at the North Pole, motley selections of Northern v Southern hemisphere teams lining up against each other who went at it, fairly vigorously, it must be said.

“Coventry Rugby was represented by my wife and I. The result was an honourable ten all draw and there was Vodka to thaw everyone out, we then began our 1,300 nautical mile journey back to Murmansk.

“It was memorable and humbling.”