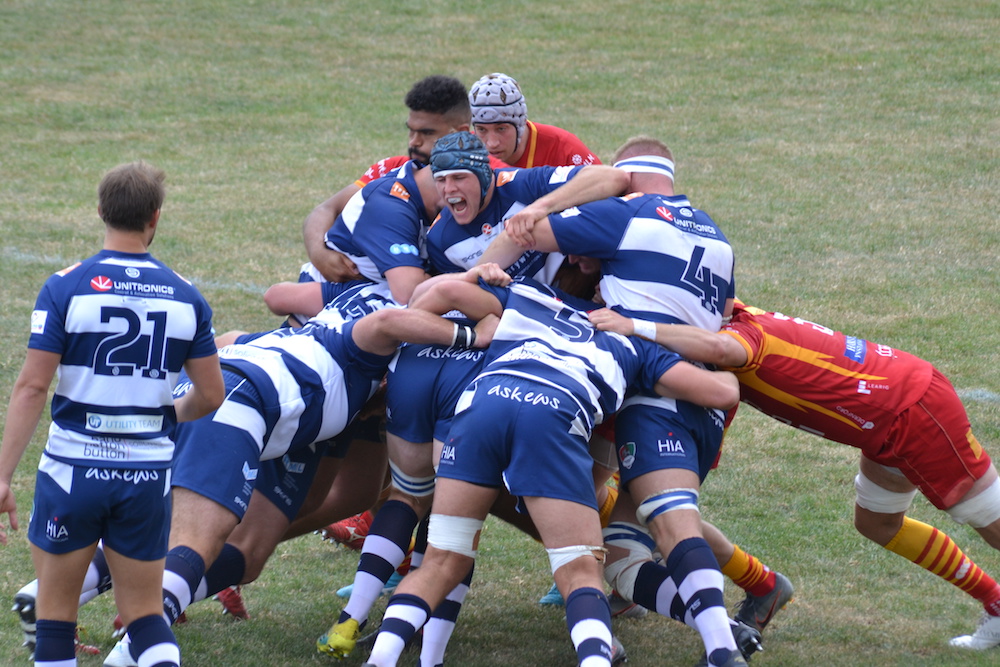 Coventry extended the pre-season winning run to three matches with a comfortable seven-try win at Cambridge.

Both sides had excellent chances in the opening five minutes, both created by the men in hoops.

An overthrown Cambridge lineout on their own 22 set up a dangerous attack from the visitors, Senitiki Nayalo involved twice and Junior Bulumakau dragged down just shy of the line.

The pressure created an overlap on the Coventry left, but just as Gerard Ellis sent out what could have been a scoring pass in came Ben Penfold to make the interception. He didn’t have the pace himself, but the support was there, the inter-passing was good, and when Andy Bulumakau slapped the ball down he was sent to the sin bin.

Cambridge could not capitalise on the man advantage, and when Bulumakau returned to action it coincided with the breakthrough from Coventry. And what a good try it was – former Cambridge man James Stokes made an arcing run down the right wing, and while the home defence scrambled there were plenty of Coventry players there too, Nayalo the man to crash over.

The lead was doubled at the end of the first quarter. Cambridge may have worked hard to get up to their 10-metre line, but while there were plenty of chasers to put Stokes under pressure the full back dealt with it superbly. With no sweeper there was plenty of space for Stokes to exploit once he broke through the line, and when he got the bounce of the ball from his kick ahead the try was a formality.

Less so was Rory Jennings’ touchline conversion, which he slotted superbly. Jennings then showed his dexterity with ball in hand, spotting a dog-legged defence in his own 22 to chip, collect and find Junior Bulumakau with a timed pass. In a flash Coventry were at the other end of the field and over the line, only to have Stokes denied a second score by Will Owen’s pass being ruled forward.

The attacking from the backs had been eye-catching, but it was forward power which brought the third try just before the break. Dominance in the scrum had been steadily increasing during the half, and when a penalty was kicked to the corner the forwards maintained their momentum by driving Joe Buckle over, the hooker sending out a telescopic arm to score.

Coventry opened the second 40 on the front foot, but it was Cambridge who had the first chance of the half. Fin Creighton – who was named as a loanee from Coventry to Cambridge on Friday – turned on the afterburners from his own 22 to burst through the defence. There was support, but also half-time replacement Ben Nutley, and the flanker did superbly to win a penalty turnover.

With both sides having made a number of changes at the break it was inevitable that it would take time for the game to settle, and it was Cambridge who continued to have the better of the chances.

Creighton remained their focal point, with a sweet inside ball putting Rob Conquest through a gap. The second row stretched his legs, but an early pass to Alex Rayment allowed the Coventry defence to scramble and force a fumble.

It took 15 minutes for Coventry to put themselves in a scoring position. Tom Kessell’s long break earned a penalty, and after the forwards won repeated penalties at the scrum it seemed only a matter of time before one was kicked to the corner.

But Cambridge’s defence handled whatever was thrown at them, meaning Coventry left the red zone empty-handed.

It did not take long for points to come, however, and when they did it was from another strong attack. Jonas Mikalcius stretched his legs down the left wing, George Oram took play into the 22, and Kessell was on hand to take the offload and finish things off.

A further seven points were added to the score with 10 minutes to play. Rob Knox combined with Owen to power Coventry deep into the home 22, and with attackers flooding forward it was a matter of time before the try came, Max Trimble going over some 10 metres from the left touchline.

Will Maisey continued where Jennings had left off from the tee, both the conversions being kicked against an increasing wind.

Maisey had a hand in the final play of the match, finding Jack Ram with a nice offload, but the flanker was held up to bring the final whistle.