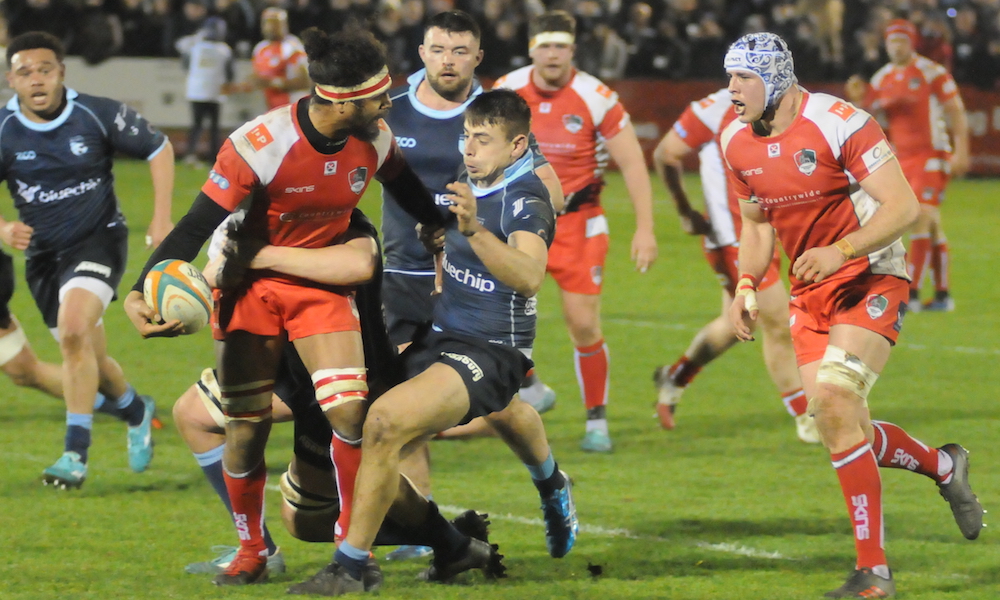 With three wins from their last four matches the Blues came into the game on the crest of a wave and they showed the confidence and determination several times in the second half to stop Cov scoring.

The opening few minutes were as marked for their missed opportunities as they were for any serious threats. Bedford made a mess of the opening kick off and were guilty of attempting one pass too many in a pair of attacks.

For their part Coventry had one lineout go long and another go short, both times handing possession back to the Blues.

In fairness to the teams none of the mistakes were howlers, with the kickers probing well, the chasing good, and the intent to play in the right areas obvious. And even when Rich Lane dropped a Tom Kessell box kick on his own 22 he was rescued by a Rory Jennings fumble in the next phase.

Indeed it took 12 minutes for the first penalty, Bedford sealing off a breakdown to give Jennings the chance to push play into the home 22 for the first time. The lineout won, Cov went right and left to try and create space, and while Bedford’s line held to force a scrum, a penalty at the set piece handed Jennings a straightforward three points to open the scoring.

Two minutes later and Bedford were in front. Like the hosts, Coventry’s defensive line was aggressive, blitzing quickly to get in the Blues’ faces. But unlike their previous three games against Cov, Bedford had USA international Will Hooley as their playmaker, and his dink was perfect for Ryan Hutler to chase, snatching the ball from Kessell’s grasp and going over for the score.

Within five minutes Cov were back on top, with a score which was equally attractive in its construction and finish. A quick exchange of lineouts saw Cov onto the front foot, and after the forwards had asked questions around the fringes when the ball came out Jennings found James Martin with a popped pass for the winger to burst through the middle. A desperate tackle halted the speedster, but Ben Nutley was on his shoulder and over for the try.

The shootout was primed, and when Matt Worley made the extra man on Bedford’s right to scythe through all he had to do was dive over in the corner. But he tried to step inside, the ball came loose, and instead of a home try referee Karl Dickson was awarding a scrum.

This became a penalty, but when Bedford won the ball back at a lineout there was no similar error this time. Hooley came onto the ball at pace, slid a kick through for Worley to chase, and while Dan Lewis was there to make the tackle an outrageous offload found Oskar Hirskyj-Douglas for the try.

Hooley missed the conversion and a subsequent penalty, and only some outstanding footwork from Lewis prevented the visitors from having a five-metre lineout.

Bedford may have missed some chances in the first half but they were right on the money at the start of the second. A Hooley kick ahead had been touched in flight and gave Bedford a lineout. Hirskyj-Douglas went straight through the middle and found Alafoti Fa’osiliva for the score.

But Cov replied immediately, running a play from a scrum that sent Will Owen some 40 metres to the try line, and even though the defence scrambled to make the conversion harder – Jennings pulling the ball left – it was still game on at 19-15.

When some Bedford ill-discipline allowed Jennings to kick deep Cov were set to carry on with their momentum. But the hosts treated their 22 as if it were the try line, putting their bodies on the line and charging an attempted Jennings drop-goal down.

Having resisted, Bedford went onto the front foot as the game ticked into its fourth quarter. On the right side of Mr Dickson, they sent repeated penalties to touch to try and break Coventry down. But the accuracy they had had in the first three quarters started to let them down, and when the hosts gave some backchat after conceding a penalty themselves on the Cov 10-metre line Jennings sent play into the home red zone.

But Bedford held out again, with Coventry eventually fumbling on the floor five metres short after repeated fringe drives had inched their way forwards.

That was as close as they got, and with a repeated series of penalties kicked to touch by the Blues they were able to take enough minutes off the clock to make Coventry’s last attack the final action of the game.

Cov did come within inches though, coming off a lineout to put pace on the play and send David Halaifonua away down the right touchline. But as they had done so many times before a Bedford player put his body on the line to bring the Tongan down a metre, force a fumble, and bring the final whistle in the process.