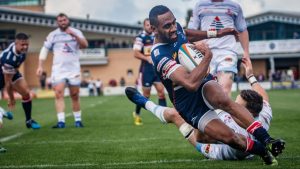 Andy Bulumakau, can play at centre or on the wing, and is a Scottish professional rugby player having moved to Scotland from Fiji with his parents and brother Junior.

Andrew previously played for Gloucester Rugby on a dual-registration contract and featured for Cinderford RFC, he made his name for the Cherry and White’s in sevens tournaments after winning the JP Morgan 7s title in 2013.

The 25-year-old was later released by the Premiership club and made his move to Doncaster Knights in 2014 where the 25-year-old marked his debut with a hat-trick in a pre-season victory over Swansea RFC.

Where did You start play rugby: Fiji

Why did you join Coventry: A lot of ambitions and help them back to the top where they belong

What are you most looking forward to at Coventry: Meeting everyone at Coventry and playing alongside with some world class players

Tell me something interesting about yourself: I was raised up in Scotland pretty much my whole life

If you weren’t playing rugby, what would you be doing: Getting a real job

Do you follow any other sports: Football (Manchester United fan)

Favourite movie: The Equalizer and waiting for part 2 to come out

Jonny Wilkinson or Dan Carter and why: Dan Carter because he has won more and he’s the all-time point scorer