AS someone who admits to being competitive by nature, Coventry Rugby’s Will Maisey is revelling in the challenges currently presenting themselves on a number of fronts.

A 17-point haul, capped by Cov’s ninth try, in last Saturday’s 63-14 win over Ampthill took the fly-half past 150 for the season as the leading scorer in National League One – a position he says was one of his goals going into the campaign.

Then there is his target of playing in all 30 games for a second successive season…..the competition for the No.10 shirt from Tony Fenner and Ben Palmer…..and, of course, his drive to continually outdo hooker Scott Tolmie, be it on the golf course, a games console or on the field.

“We have a lot of competition between us for pretty much anything and everything,” said Maisey. “I know he was a little bit gutted that he missed out on the last game through injury last season, he was the only other player on 29 appearances, but it’s just another thing I could beat him at!

“He does talk a good game, especially when it comes to goal kicking. We have a kicking competition on a Thursday night after training and we have a little bet leading up to Christmas – we’ve had 15 to 20 so far and I’ve won them all, but there’s still three or four more to go before I get the money.

“I’ll give Scott credit where it’s due, he’s not bad at kicking – but I still think he’s a long way down the list before he starts kicking on a match day.”

Perhaps the right time to mention that Tolmie is currently ahead on tries this season, 11-4, but it’s all part of the friendly banter and spirit within a united squad which is contributing to their success on the field.

“Last year we had a completely new squad which took time to knit together, but we managed to keep hold of the majority of the squad and added some real quality as well,” said Maisey. “They gelled straight away, and we’re at tight-knit group which is great to be around and has helped us massively.

“I think the level of detail in training has improved, we’re a lot more disciplined than last year, and our defence under Luke Narraway has improved dramatically.

“All the coaches have been working extremely hard, and I think the fitness levels are improved – you’ve seen that in a lot of the games when it’s been quite close but we can pull away in the last 20 minutes.”

Speaking after the Ampthill game, head coach Nick Walshe highlighted the improvement that Maisey, who turned 25 last week, has made in terms of his game management this season.

“I think that comes down to working with Nick quite closely,” said Maisey. “He spends a lot of time during and after training, even out of training – we’re on the phone quite a lot during the week – and he’s constantly letting me know what’s going well, what I can improve upon and how to improve, and then I try to take that out on to the field. I think in the last couple of weeks I’ve been able to show that.

“The quality players we’ve brought in have got that x-factor about them and when it’s needed they produce it – like Tom Kessell. Having him inside me and then Sam Tuitupou and Anthony Matoto outside me, with those guys around me I don’t have to do too much to be honest.

“The service Tom provides and his kicking is taking a lot of pressure off me.

“Pete White and Dave Brazier are quality players, it won’t be too long before they come back and then it will be a tough choice to pick between those three at scrum-half.

“It was a really good performance and result against Ampthill – it’s always good to get five points no matter what the final score, but to win so convincingly was awesome and really good from the team’s perspective.

“I think we’re actually putting on to the pitch what the coaches are intimating in training, and as players we’re all really enjoying it as well which is great.

“Confidence obviously comes after such good performances and the results, and I thlnk confidence is extremely high at the moment.

“I was at Ampthill a couple of seasons ago and they’re still playing the sort of rugby they were then which, as a back, wasn’t fun at all. Here you’ve got the licence to play what’s in front of you and play from anywhere really, within reason, providing you’re making the right decision. It makes a nice difference and it’s really enjoyable to be in that sort of environment.

“I’m expecting a really tough game at Darlington Mowden Park this weekend, they look a physical side and they’ve got some real threats.

“But, again, we’re confident, we’ll prepare for the game just like we would for any other and come up with a game plan and hope to bring that to the pitch. I’m sure we’ll be up for it.” 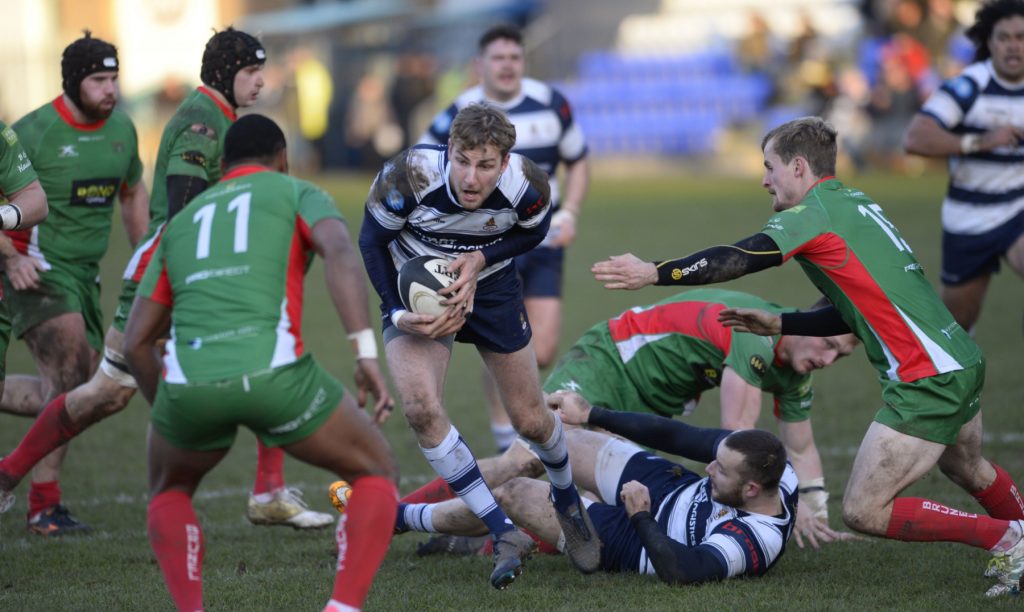 And what about those other challenges?

“The kicking is something I do enjoy, and although I’m not looking too far ahead at the moment it would be great to be top points scorer which, I guess, is something I’m aiming for,” said Maisey, whose 152 points are 17 ahead of Plymouth Albion’s Dan Mugford, a former team-mate of his at Nottingham.

“It took me a lot long longer to get to 150 points last season, at the start of last year Fenner was kicking most of the time and it was more towards the end of the second half when I started picking up a lot of points.

“If I could double what I’m on now it would be amazing – especially now they’ve taken away the two points for the penalty try conversion. I think that’s one of the worst Law changes I’ve ever seen!

“Tony started the first game this season and was very unlucky to be injured. Obviously while I was disappointed not to start considering the season I’d had last year, and especially towards the end, it really gave me a kick up the backside and made me work extra hard.

“I was very fortunate that he got the injury which gave me the chance to pick up where I’d let off, but he’s back now and really pushing me for the spot and keeping me on my toes.

“Ben was a great signing for Cov, he’d probably walk into most teams in this league and he’s probably been a little bit unlucky to be behind myself and Tony.

“Last year one of my goals really was to get 30 appearances because the season before at Ampthill I was actually selected for all 30 games but only played 28. I was a bit disappointed not to get on for those two games, so it was really cool to do it as the only one at Cov last season.

“I’d love to do it again, it’s a bit of a target of mine and hopefully I can keep it going.”