The case for the defence

‘DEFENCE wins championships’ is one of the most-used adages in sport, and if it’s as true as some statistics suggest, the input of summer signing Luke Narraway is already giving Coventry Rugby a fighting chance.

After captaining London Irish to promotion back into the Premiership last season, the former England back row selected Coventry for his first venture into coaching, focusing on defence in a dual role of player-coach.

And the early evidence us pretty compelling with only four tries conceded – including two in the first eight minutes of the opening game – in three matches which all ended in wins.

“I’ve been really happy with it,” said Worcester-born Narraway, 34, who won seven England caps and made 163 appearances for Gloucester before moving to Perpignan and then London Irish.

“The boys have taken to the principles that I’ve brought in like a duck to water, to be honest. They’ve learnt really quickly, the foundation is in place, and now we can start adding on to that and hopefully developing our defence into something that can be a real asset for us moving forward.

“No successful side was ever based on a poor, leaky defence – it’s something that we needed to address for this year, and obviously Rowland Winter has had some faith in me coming in and delivering that.

“So far it’s been pretty good, it can always be better but it’s a good start.”

Winning games always helps, but Narraway – who has qualified as a Level 2 coach and recently completed a degree course in management and leadership – is happy that his decision to join Cov was definitely the right one at this point in his career.

“It’s been brilliant so far,” he said. “In the short time I’ve been here it’s clear to see what a great club it is, a sleeping giant if you like, and also what a great fan base it has – not only at home, but when you go away to places like Old Albanian and there’s still a massive travelling contingent of fans.

“I’m really enjoying it. Coming here was just the right fit with where I was in my career and the transition after rugby. I met with Rowland and it just seemed to click into place – I’m thoroughly happy that I said yes.

“Coaching is something I’ve thought about in the last couple of years as the body gets a little bit worse for wear, and when the opportunity came to put that into practice as well as carrying on playing and getting another year or two out of the body, I jumped at the chance.

“I’m massively enjoying playing. It was a bit of an unknown quantity coming here, I didn’t know what the league was going to be like, but I’m enjoying it at the moment and it’s good to be playing alongside lots of young men spurring me on!”

Does being on the field complement coaching? “It can do, and at times it can be detrimental to it because sometimes when you’re actually in the thick of it you can’t see the bigger picture and, to be fair, sometimes it’s better to be watching in the stands. But, obviously, all the games are recorded so I look at those and it is good to be out there.”

Has anything about National League One rugby surprised him?

“It has in some ways – there’s actually a lot of skill in this league. I played against Loughborough last pre-season for London Irish and one thing I remember is the pace they played the game at, it was definitely quicker than some of the Championship games we played.

“Obviously you haven’t got the full-time time period to go into all the detail of games, but the actual out-and-out talent is definitely there and that’s something you’ve got to harness.

“There is some difference in the physicality – some boys are a lot bigger in the Championship and Premiership because of the time they can spend in the gym. But, for instance, the start of the Moseley game was pretty physical and I imagine the perceived top five teams will be direct like that.

“That’s something we’ve got to pride ourselves on. Our physicality wasn’t where we expected it to be against OAs, especially after giving a pretty good account of ourselves against Moseley when it was exceptional. We just have to make sure we don’t yo-yo in terms of our physicality and our collisions.”

Saturday’s game brings together two of the three remaining unbeaten sides, and Narraway is looking forward to another match-day experience at Butts Park with some relish.

“I had a great day here against Moseley, the crowd was fantastic, and obviously Blackheath are undefeated, as we are, and with a very tight defence.

“It will be another challenge for us, but one we are welcoming especially after the lack of performance we expected from ourselves last week and being back at home. We want to put a marker down, especially as Blackheath are another perceived top four side.

“Realistically, there’s probably six teams in the league all vying for promotion, only one can go up, and it’s going to be competitive. I don’t think there is one team that is out-and-out favourites, so we need to make sure that we take each game week-by-week, keep improving a little bit in the little detail, and make sure that every time we train and play we get better by those small percentages.” 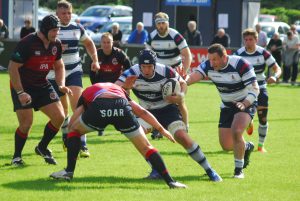 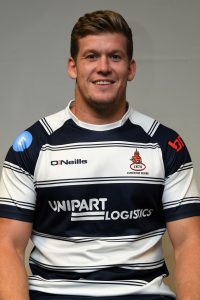