Team news for visit to Cambridge

COVENTR Rugby make two changes to the backs in their starting line-up for tomorrow’s visit to Cambridge.

Sam Tuitupou (pictured) comes back at centre in place of Fraser Dingwall, who goes on to the bench, while Tom Emery has recovered from the shoulder injury that kept him out of last week’s 36-0 win over Loughborough Students and returns on the wing for James Neal. 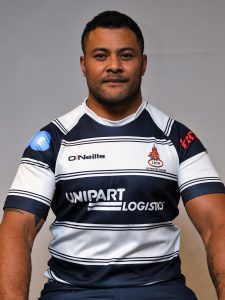 The pack is unchanged, but the experienced trio of Phil Nilsen, club captain Phil Boulton and player-coach Luke Narraway are all back in the squad on a strong bench.

“The level of performance in the last two weeks has been superb and we need to reflect that in selection, which is why the pack remains unchanged,” said director of rugby, Rowland Winter.

“To be able to have players of the calibre of Luke and the two Phils as squad replacements is pretty handy and brings us lots of experience and quality coming on as the game goes on.

“In the back line, Tom’s ability to cover a number of positions, and goalkicking as well, is a real asset now he is fit again, and he has scored four tries in three games for us.

“Sam comes back in fresh to give us a bit of an edge in midfield, and Fraser will come off the bench and continue where he left off last week.”

Victory for Cov will see them set a club record of 17 successive wins, and the eight achieved this season have given Cov a six-point cushion at the top of National League One,

Cambridge are currently mid-table with four wins from eight, but after a narrow loss at high-riding Plymouth Albin they put 50 points on Rosslyn Park in their last home game two weeks ago before pulling off an 8-7 win at Ampthill last Saturday.

“They like to move the ball around and take teams on, but over the last 18 months they improved their defence and, especially more recently, developed a more solid platform with an improving pack,” said Winter, who led Cambridge to promotion two seasons ago.

“It’s a different Cambridge to the team I left and we expect, as usual, a tough challenge. Away from home we are going to need a very good performance from our team and also some strong support from the travelling Coventry fans who can play a big part.

“It’s a game we need to prepare well for, we’ve identified their threats, we know what to expect, and we’ve got to go and do the job – we’re looking forward to getting out there.”

Kick-off at Volac Park is 3pm.

Coventry Development are also in action at Cambridge in a Zoo Sports Shield fixture (2.30pm) and field a side including fly-half Tony Fenner, out since suffering broken ribs in the opening National One game of the season at Hull Ionians.

Second row Tom Jubb and back row Waita Setu also start after injury interruptions with winger James Neal and prop Luc Jeannot included after figuring in the first team for the last two weeks, while Ben Palmer takes on a new role at scrum-half.

“Luc has done a great job so far and, with Phil Boulton returning, he can continue his development and get additional game time under his belt. The same apples to James,” said Winter.

“It’s a strong side and it will be good for Isaac McNulty and Joe Lane at centre to work alongside Tony Fenner and Ben Palmer who we are trialling at scrum-half with Connor Adams loaned out to Stourbridge where he’ll be starting this week. It’s an opportunity for Connor to pick up some good game time – he’s got two good 9s ahead of him and needs to be challenged a bit more.”

Also set to go out on loan for the week are Development Academy front rowers Fred Clark, Charley Robinson and Tarik Tin in response to a request for help from Towcestrians, who are at home to Southend Saxons in the London & South East Premier division.

Rob Knox’s return has been put back  a week after he took a knock to his injured fingers at training this week, and Louis Roach has a hamstring issue which will keep him out for up two weeks. Andy Brown is a fortnight away from a return after hand surgery, leaving Pete White, Alex Grove and Tom Poole as the remaining longer-term absentees.

WEEK 9 sees a couple of key games at both ends of the table with two of the top four sides playing each other and, likewise, two from the bottom three.

Blackheath, in second place and six points behind Coventry, travel within the M25 corridor to Esher  in what is a crucial match for both sides but for different reasons. Blackheath need to keep in touch with the leaders whilst Esher need to keep their heads above the danger zone. Despite Esher desperately needing the win, Blackheath on their current form should be favourites.

It’s fourth against third as Darlington Mowden Park host Plymouth Albion. Both were less than impressive last Saturday in failing to win, but DMP at home should have enough confidence and ability to take on the Albion pack and get a narrow win. It could be a bruising encounter.

Another top five club failing to win last week was Ampthill & District, who now travel to Caldy. With Ampthill now ten points behind the leaders it is looking a must-win for them, but Caldy have surprised many so far this season and  have been involved in some close games while not always getting their just rewards. A close but exciting game may just go the way of the Wirral side.

Bishop’s Stortford are in sixth place following their excellent away win at Moseley and have 12th-placed Old Albanian as their visitors. OA had a fine home victory over Esher last week but are in need of another as they are still only three points above the relegation zone. BS at home should be too strong for them.

Another side doing well in their first season in NL1 are Old Elthamians, who entertain London neighbours Rosslyn Park. After a stuttering start to the season the visitors have now won three games and will be looking for another victory to move them up the table. However in OE they will find an experienced side not looking out of place in this league. A game which could go either way with the home side slight favourites.

Bottom side Fylde, now nine points adrift, have Birmingham Moseley as their visitors. Moseley suffered something of a surprise home defeat last week although their forwards played well, and  they do need a win to move up the table. With Fylde struggling this year this would seem to be the ideal chance for Moseley to get an important away win. Another loss for Fylde would make them favourites for relegation.

There is an intriguing battle in prospect between 15th-placed Loughborough Students and Hull Ionians in 14th. The Students had a hard-fought loss at Coventry last week whilst Hull Ionians had an important home victory. On their own patch Students can be a force so a close game is in prospect, but the visitors should be slight favourites to win this one.