Rosslyn Park have agreed to offer a discounted ground admission price, from their normal £12 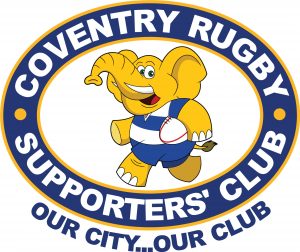 , but the offer will be based on the number of travelling supporters, so we will not know until Friday when all bookings have been made. Steve Hood, who will be coach manager, will announce the deal on the coach.

To book a seat, please use the dedicated Supporters’ Club email address which is crsc1874@gmail.com

The Supporters’ Club is also looking to run a coach to the game at Darlington Mowden Park on December 10.

The cost for reflects the fact that it is one of the three most distant game locations from Coventry, so the Supporters’ Club needs to make the hire of a coach financially viable, therefore a minimum of 30 seats will be needed to be booked and each will cost £22 to Supporters’ Club members. The coach would depart from BPA at 11.00am.

On the basis of a minimum of 30 Coventry supporters entering their ground, DMP have agreed to a offer an admission discount – more details later.

Could those who are interested in making a booking please make contact via the Supporters’ Club dedicated email address on – crsc1874@gmail.com