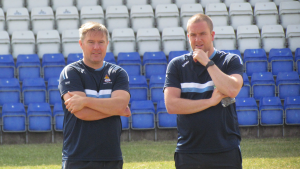 Director of Rugby Rowland Winter has admitted his excitement at the mouth-watering prospect of another Coventry-Birmingham Moseley derby day at Butts Park Arena during pre-season.

Rowland Winter and his coaching team will oversee Coventry against Bishop’s Stortford, Birmingham Moseley, Leinster A and Wasps during pre-season before the side kick-off their Championship campaign at home to Jersey on September 1st.

With pre-season edging closer for Coventry, Winter admits that he is looking ahead with anticipation to the Birmingham Moseley game at Butts Park Arena.

“Friendly isn’t quite the word I would put in front of them,” said Winter.

“You only need to look back at all the years and the histories between the two clubs and in particular the last couple of years. Last season we got two bonus-point wins against them home and away, so it will be another chance to get one in pre-season.”

The Blue and Whites attained a huge 50-11 win early in September, scoring eight tries in a convincing performance in front of a home crowd and backed that result up with a 41-17 win at Billesley Common.

Coventry kick-off their pre-season schedule in 14 days with an evening away trip to Bishop’s Stortford, a side that the Blue and Whites struggled against last season.

He said: “They are all going to be tough, we start with the Bishop’s Stortford fixture and Andy Long and his coaching team always prepare a tough team.

“We struggled against them a couple of times last year to break them down. To go away from home with the whole group, they will all get 20 to 30 minutes each and that will be a really good test to get them going.

Winter was full of belief and excitement when the fixtures were confirmed and added that the Stortford game is a pre-course of what is to follow.

He added: “That’s a good appetite game before our pre-season match two or three days later against Birmingham Moseley on the 11thand we are all looking forward to that one as we would do for a Coventry-Moseley derby.

“Then the Leinster trip and then obviously the Cambridge and Wasps at the end will hopefully be an opportunity to work our combinations and put the boys through paces and pressured up and ready to go.”

An away trip to last season British and Irish Cup finalist’s beckon for Coventry and despite the Dublin-based European Champions, Winter insists the side are excited for the game.

He added: “What a fixture. We are going away from home, we get a weekend in Dublin as well and the boys will get the chance to bond.

“But, first and foremost we have a big tough test against a side that have a first team who are European Champions and an A side that we will be playing were in the British and Irish Cup final.

“I’m sure that whatever team they put out it will be a real tough challenge for us and it’s something that we are really looking forward to.

“We are looking forward to the opportunity of bonding a little bit more as a group, we get to see what Dublin has to offer before we come back for the Cambridge and Wasps games on the last weekend.”