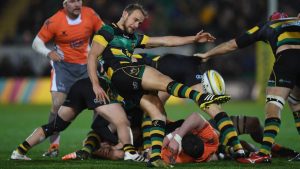 Coventry Rugby are delighted to announce the signing of former Cornish Pirates scrum-half Tom Kessell, who joins on a two-year contract from Northampton Saints.

Kessell, 28, spent three seasons with Saints since joining the midlands outfit in 2015 and made 22 appearances in his time at Franklin’s Gardens.

The scrum-half spent time on loan with Coventry Rugby in the National One title-winning season, making six appearances.

A former Pirates product, who made 54 appearances for the West Country club was named the Championship Player of the Season for the 2014/15 season, to which he earnt his move to the Premiership club in 2015.

The 28-year-old half-back earnt his representative honours in 2010 when he toured Canada with England Counties and scored two tries in two starts in North America.

Kessell has played a key role in Northampton Wanderers’ A League side and won the league double in consecutive years against Gloucester united and Exeter Braves.

His first Premiership and Champions Cup caps came in the 2016/17 season, and saw him feature in battles against the likes of Current European Champions Leinster, French giants Montpellier and Leicester Tigers.

Director of Rugby Rowland Winter was delighted with Kessell’s addition, hinting that the squad is now nearly complete.

He said: “We are really excited to bring Tom to Coventry, he had a big impact on the team when he was on loan last season and performed really well in some important games for the club.

“He brings added experience and quality to the squad, and further competition for the scrum-half shirt.”

Whilst making an impact on the field, Kessell will also be joining the club in a coaching capacity and will join Club Captain Phil Boulton in the delivery of the Under-18’s Academy programme.

Winter continued: “Alongside his playing role, he will join the U18 Academy coaching team, working alongside Phil Boulton and will add to the local player pathway.”

“We are very happy with the quality and depth of the squad and we have a few more announcements to make over the next few weeks.”