Olly’s back on track

FEW players can have had such an unlucky start to their Coventry career as Olly Povoas, but things appear to be looking up for the 20-year-old back row forward after safely coming through two full games in just four days.

A summer arrival from Leicester Academy, Povoas suffered a knee injury on his Cov debut off the bench in the win over Macclesfield on week three of the season.

Returning for his full debut at Ampthill in mid-November, he was carried off midway through the first half with a neck injury and taken to hospital for precautionary checks.

And although he recovered to play the first hour against Cambridge the following week, he then suffered a broken hand at Rosslyn Park – only returning to the side for last Saturday’s game at Plymouth Albion after an absence of 11 weeks.

But, sharpened by a midweek outing for the Penguins at Cambridge University, Povoas put in a strong 80 minutes at open side at Brickfields and is looking ahead to a good finish to the season with renewed optimism.

“It’s nice to be playing again, and definitely good to finally get 80 minutes under my belt and do it twice,” said Povoas.

“I’m hoping I can get a good run toward the end of the season and string a few games together, then have a good pre-season and get going again next year – with less injuries. I’m hoping I’ve got them out of the way now.”

Injuries are not a new thing for Povoas, who began playing as an eight or nine-year-old at his home club, Market Harborough before going into Leicester Academy at the age of 16.

“I was there for four years, but after a good first year I was injured for a lot of the rest of the time – I had both my shoulders operated on and had problems with my legs, so to be honest I didn’t really play much when I was 18 and 19.

“I’ve had a number of injuries over the last few years, but it happens, doesn’t it? It’s rugby.

“Hopefully now I can try to make myself a bit more robust.

“The training and medical set up at Coventry is really good. The strength and conditioners give you programmes and tell you what you need to do, the physios are really good, and I know (rehab coach) Max Hartman from Leicester, he was intern when I was there – they’ve sorted me out so far.

“I’m really enjoying it here – we’ve got a good group of lads, I get on with the coaches and the coaching is good.

“I feel that I’m making progress. I played in National Two on loan at Leicester Lions a bit last year and I think that helped me make the transition into National One.

“Obviously it’s a step up, but I kind of neared that level the previous year and did expect what was coming a little bit.”

Povoas also spent three months playing in New Zealand in 2013, going out to Dunedin with Charlie Beckett who made five appearances for Cov that season on loan from Leicester, which he described as an “absolutely brilliant” experience.

“It was just about the best three months I’ve had, we were playing schoolboy rugby but it was such a good standard and really helped to develop my skills.”

And if advice is needed, he can always turn to his dad, Simon, who played 135 games for Leicester Tigers in the back row.

“I suppose it puts the pressure on me a bit, but not loads,” said Povoas, who works in the family polythene packaging business. “To be fair, he just enjoys watching me and my brother, Henry, play. He doesn’t put too much pressure on us, he’s quite laid back which is really nice.

“I’ve played all across the back row, it’s just depended on who I’ve been playing with and what age. I played at No.8 until I went to the Academy when I was 16, then moved between 6 and 8 in my first year there and after that payed mainly 7 or 8.

“They all have their good points, but I’ve enjoyed 7 at Coventry – it’s good the way they play, you get a bit of a free role around the pitch and in attack so you can always be involved and get stuck in.” 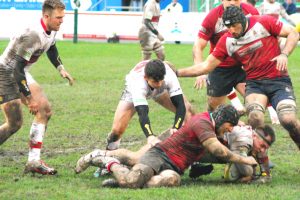