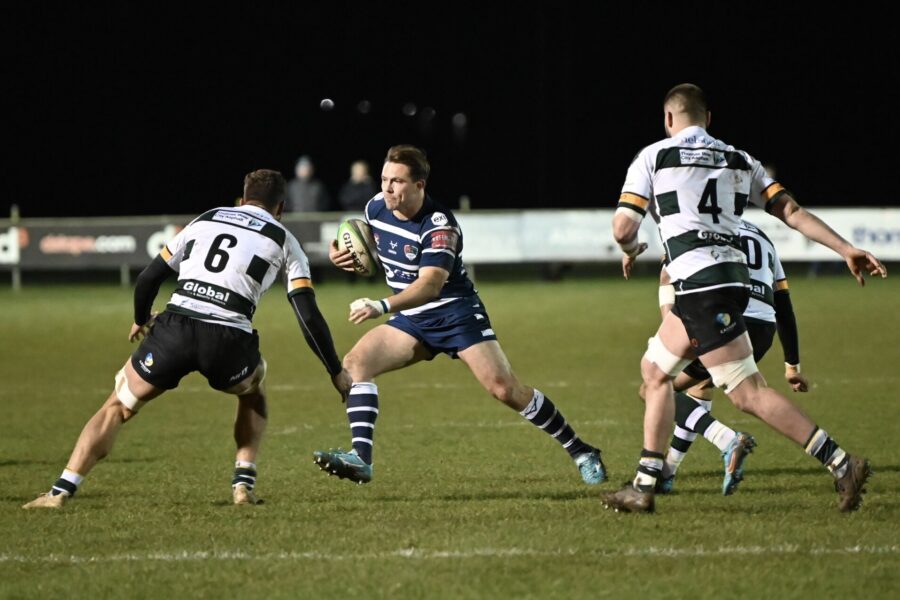 Coventry leave The Bay with dissapointment after a tough loss against Nottingham Rugby.

Coventry struggled to capitalise on their opportunities and it told as the hosts made the most of theirs to come away with the win on a blistering cold evening in the Midlands.

Both teams shared plenty of early ball and Nottingham made it close to the line after a scrum on halfway, but it was the Blue-and-Whites who placed the first points on the board in the opening ten minutes of the game.

Making an impact back from injury, Senitiki Nayalo regained possession and shifted the ball to the left wing. Soon after, Coventry was awarded a penalty inside Nottingham’s 22.Josh Barton saw his opportunity for a quick tap-and-go and quickly offloaded to Josh Bainbridge beside him to cross the line. Tony Fenner converted with ease placing Cov seven points ahead, seven minutes into the game.

Unfortunately, it didn’t takelong for Nottingham to retaliate. Four minutes later, The Archer’s winger David Williams chased after his own kick up the right-hand sideline beating the Coventry defence to the ball and making it the full distance. Morgan Bunting was unable to convert leaving Coventry ahead by two points.

Nottingham gave away another penalty inside their own 22 – this time for not releasing, which provided Coventry with an opportunity to extend their lead. Fenner lined up the ball in front of the posts and slotted it through for the three points; making the score 5-10 near the end of the first quarter.

Now 26 minutes on the clock, ill-discipline began to rear its head for Coventry and it was over to Bunting with his own shot at the posts. Taking his chances from halfway, Bunting’s boot makes the distance and helps to close the gap for his team to just a two-point deficit.

Nearing the half-hour mark, Coventry’s defence started to appear a problem when Harry Graham hopped through the spaces leaving just one man to beat. Finding Jack Stapley on his side, the winger was able to cross the line clear of any Cov men. The conversion was successful and Nottingham took the lead for the first time that evening. 15-10.

Just three minutes left of the first half and Nottingham was awarded another penalty and kicked to the corner. Williams chases down the bouncing ball from the line-out and found the line for his second try of the game. No conversion was achieved, but it didn’t appear to concern the hosts when they departed the pitch for half-time ten points ahead of their competition soon after.

A big push was needed, but having seen plenty of second-half comebacks this season, hope was still shared amongst the impressive heard of Coventry supporters who made the trip.

Two minutes into the second half, Coventry was awarded a penalty and kicked to the corner. From the line-out, a determined driving-maul ensued. Not looking to make things easy for Coventry, the same determination was reflected in Nottingham’s defence and shut down the pack advancing from the maul. This forced Coventry to shift the ball to Captain Ryan Burrows, who crashed over the line and finished off the strong attack. No conversion was achieved which placed Coventry in 5 points behind 20-15.

It was just five minutes before Nottingham found the gaps in Coventry’s defence again – Michael Stronge finishing the attack which would prove to be the final try of the game. Bunting was good for another and the conversion made it through. 27-15.

Two or three more threatening attacks developed afterwards but Coventry stood strong to hold off any more points developing. The highlight of the three was when Rob Stevenson chased down a Nottingham interception on halfway, crashing into Jack Stapley 5m out and managing to clear the ball right after. Coventry had their fair share of opportunities in the half-hour after the final try but dropped balls and lack of discipline ultimately lost the game for Coventry that evening.

Coventry go without a fixture this following week and return to Butts Park Arena on Wednesday the 23rd February for a friendly against the RAF (KO 19:45). The fixture is free to attend but still requires a ticket upon entry. You can redeem your complimentary ticket here. The next Championship League fixture follows that Saturday (26/02 KO 15:00) against London Scottish.