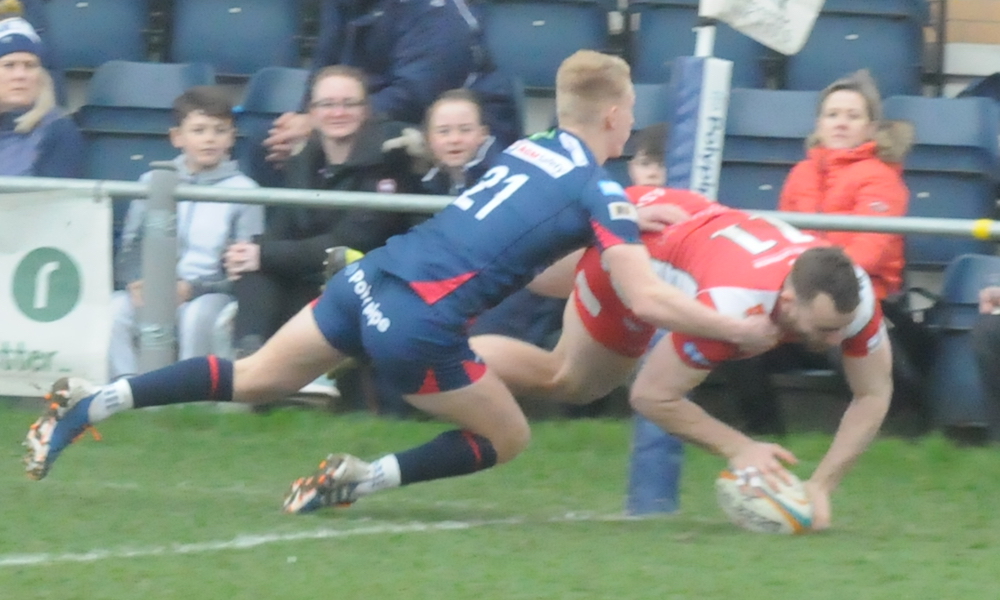 Coventry had to overcome an early nine-point deficit and 20 second half minutes with 14 men to come home from Castle Park with a maximum haul to lift them to fourth in the Greene King IPA Championship table.

The first 10 minutes saw Doncaster open up a nine-nil lead without really having to fire a shot or be creative, Coventry conceding a trio of penalties around the 10-metre line which Sam Olver converted unerringly.

Indeed Cov were just unable to get a foothold in the match, being either forced to play from their own half or penalised on their put-in at a scrum the first time they had decent position in Doncaster territory.

However the next few minutes definitely went the visitors’ way with a trio of quickfire tries which put Cov in front. The scores were shared around, both in terms of who crossed the line and the way they were created.

First over was Andy Forsyth, intercepting an Olver pass to run in from halfway. Then Forsyth showed his unselfish side, drawing the full back and finding Ryan Olowofela for his first try in Cov colours.

The third was even better on the eye. Will Owen, whose offload had put Forsyth through a gap, used his power to bounce off a couple of attempted tackles to give Cov good ball after they had won a turnover in their own half.

Rory Jennings sliced between a couple of forwards and turned on the afterburners, and while he was pulled down close to the line the support was there in numbers and simple hands put Rob Knox over in the corner.

But then Doncaster hit the front again, Foto Lokotui going over from close range and Olver nailing both the touchline conversion and a fourth 40-metre penalty.

Nevertheless it was Coventry who were playing with the tempo, looking to run Doncaster this way and that in an attempt to create space and mismatches to exploit. On a number of occasions they came close, too, only for either a Doncaster player to scramble and make a tackle, the hosts receiving a fortuitous decision, or the ball to hit the deck.

For their part the Knights were preferring the steady approach, taking their time to form a setpiece and then using power and physicality to go over the gain line. The tactic came close to paying dividends, too, Charlie Foley somehow stayed on his feet to go close to the line and win a penalty.

This was kicked to the corner, but when the ball was overthrown it almost set up a score at the other end. Olowofela took off and headed over halfway, and with Cov hitting the line at pace and retaining the ball well they were soon within sight of the whitewash. But again Doncaster somehow managed to get back to where they needed to be, Coventry’s pack went around the fringes and at the crucial moment referee Mike Hudson had his arm raised for a home penalty.

Turning around 17-19 down Cov looked to continue where they left off in terms of forcing the pace up to where they wanted it to be.

This was not only in attack, and there were a couple of great turnovers from Nile Dacres and Ben Nutley which caught the eye. The second of these put Cov into a great position, and – thanks to a high tackle on Ryan Burrows – into the front again courtesy of a Jennings penalty.

But Gareth Denman’s yellow card put Cov under pressure, and there was a let-off when Kyle Evans dropped a Penikolo Latu pass with the line at his mercy.

Some astute play from the forwards from the lineout did not just get Coventry out of the danger zone, but by inducing Lokotui to concede a penalty sparked the momentum which would bring a try.

A couple of phases later Evans had made a mess of a Forsyth kick ahead, and thanks to a fantastic chase from Dacres the visitors had a lineout in the red zone. The pack did the rest, driving Burrows over, and with Jennings on target Cov were two scores clear going into the final quarter.

It had almost been the perfect way to see out the sin bin period, spoiled only by a Tom James try and Olver conversion which made it a one-point ball game once again.

Then no sooner as they had returned to full strength Cov were back to 14, Jack Ram seeing yellow for tackling the catcher in the air at the kick off. This was followed by a fifth shot at goal from Olver, but this time the wind held the ball in the air to fall short, and with Doncaster not chasing in a line the space opened up for Jennings.

The fly half took off, and a couple of passes later Olowofela was away down the right. The kick came in, the winger chased, and but for a lucky bounce and some good anticipation from Olver Cov could well have been over again.

A Jennings penalty nevertheless meant that Cov won the second sin bin period 3-0, and going into the final five minutes the visitors had a four-point lead overall.

Only a desperate Evans tackle on Burrows prevented this being extended quickly, but with Cov now well on top in the scrum they were now winning regular penalties, and with one final advantage Tom Kessell sent a long pass to Knox, who dived over for his second, the team’s fifth and bring the curtain down on a good afternoon.