Coventry Under 18’s start life with a bang 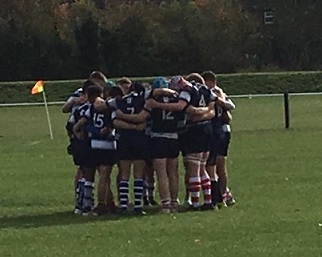 Coach Phil Boulton described himself as a proud man after Coventry’s newly-launched U18 side pushed Nottingham hard before succumbing to a 22-19 defeat at Long Eaton RFC.

“It was the team’s first time playing together and they did really well,” he said.

“It has been many years since we had a side at this level, so they were all part of a historic day.

“With a bit of luck we could well have won, and now we can look forward to the rest of the season with real optimism.”

The visitors got off to the best possible start when possession was retained through a number of phases before an accurate cross-kick sent Oliver Clark over.

However, the hosts came back hard, claiming a try in the corner following some good handling and a forwards try via a strong scrum, to go into the break with a five-point advantage.

Really proud of the @CoventryRugby U18 squad today who played their first ever match against @NottinghamRugby U18’s. Really tough contest which Notts just edged 22-19. Thanks to @LongEatonRugby for hosting. #happyCoach #theFuture #tenseFinish #makingHistory

A number of new faces introduced at half-time continued where the starters had left off, applying plenty of pressure to the home line.

And eventually Cov got their reward when Theo Idris sent Jack Edwards racing over for a try which Tom Keay upgraded.

With Drew Sinnot in the sinbin, Nottingham reclaimed the lead through two quick tries, one of which was converted.

Undeterred, the blue-and-whites finished strongly and after a well-worked lineout move Edwards claimed his second touchdown of the half, again converted by Keay.