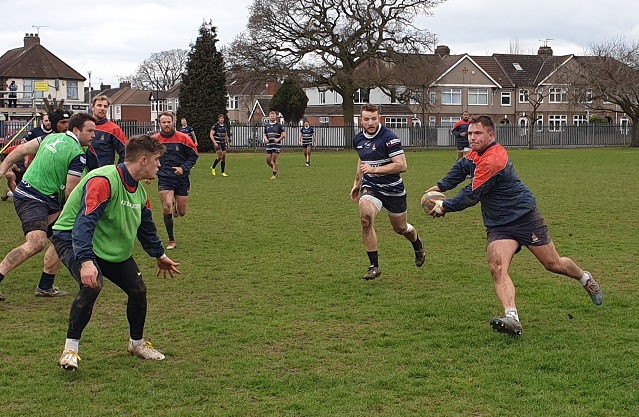 Will Owen makes his Coventry debut when Ealing are the Greene King IPA Championship visitors to the Butts Park Arena tomorrow (3pm kick off).

The powerful centre, who recently joined the club represented by his father Glyn in the late 1980’s from Doncaster, recovers from a wrist injury to wear Cov’s No.12 shirt against the second-placed Trailfinders.

The 25-year-old partners Rob Knox in midfield outside his former Kenilworth Colts fly half Will Maisey and Tom Kessell.

The back three comprises David Halaifonua, fit-again Andy Bulumakau and Max Trimble who impressed against the RAF last Wednesday.

George Oram and James Voss once again make up the engine room, while Dan Faleafa, Ben Nutley and Adam Peters combine in a mobile back row.

Second row Scott Russell who was man-of-the-match against Hartpury prior to picking up an injury, makes his return via the bench where he is joined by Pete White who has also recovered from a knee problem.

“We’re expecting Saturday to be really tough. Ealing have a fantastic squad put together by Ben Ward and are aspiring to become a Premiership outfit. They have worked very hard and spent quite a bit of money to establish a rugby programme that puts them at the top of the table.

“They reached two cup finals last season and are already in another one against London Irish this year and no doubt Ben is hoping they can go one step further in the league very soon.

“When we went down there we were the second-best team on the pitch to the tune of 60-odd points, but we are really looking forward to playing them at the Butts Park Arena where our record is good.”

Advanced tickets for tomorrow’s Greene King IPA Championship clash with Ealing, preferentially priced at £18 (seated), £15 (standing) and £2 (ages three to 16) are available before 4pm today from the Butts Park Arena ticket office on 02476 231001.