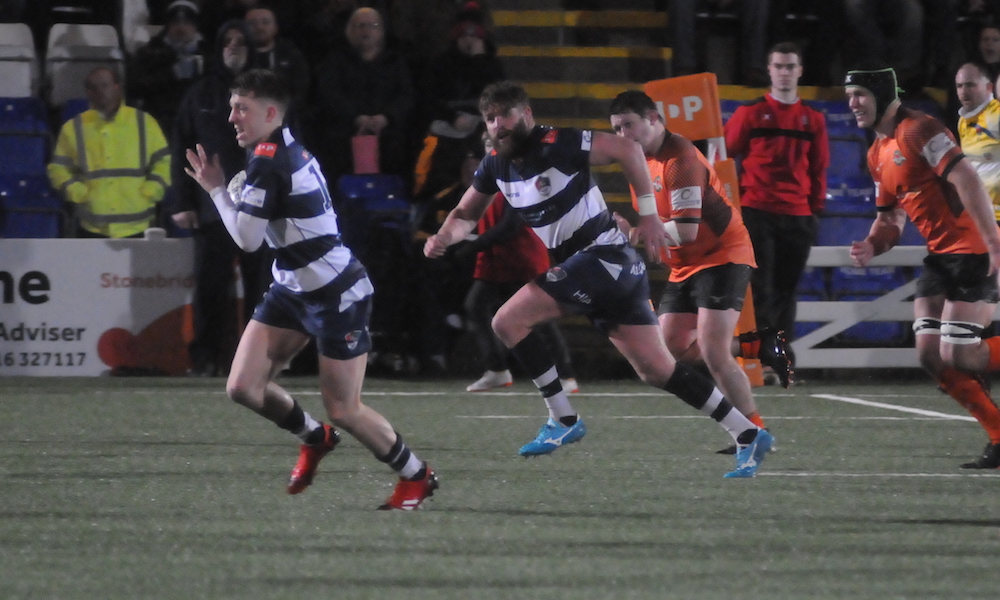 Coventry Rugby’s home unbeaten Greene King IPA Championship record was ended by an Ealing Trailfinders outfit who continued their own undefeated run of matches since the turn of the year.

The top four battle lived up to its billing as the teams stepped up to the mark from a physical perspective from the first minute to the last. But when the final whistle blew a few first half mistakes from the home team proved crucial, the momentum given to Ealing ending with a pair of tries from Pat Howard and Elliot Millar Mills.

Howard’s came with eight minutes on the clock. Cov had seen off Ealing’s early pressure, but a handling error after a driving maul handed the visitors possession. Reon Joseph put Cov onto the back foot and when the ball was recycled fly half Craig Willis sent a grubber to the corner for South African Howard to dive onto.

Willis’s conversion from wide out was excellent, as was Rory Jennings’s long-range penalty which got Cov onto the scoreboard.

With rain coming down in abundance and a swirling wind coming in from the railway end it was no surprise that boot was being given to ball at regular intervals, testing both sets of back threes.

So it was to many players’ credit that mistakes were relatively few and far between, and when Louis Brown slipped a tackle and turned on the afterburners it looked like the debutant was going to have a dream start to his Coventry career.

However referee George Smelwood’s arm was raised for an Ealing penalty for an apparently bit of crossing on halfway, and when the visitors kicked deep it sparked their most concerted period of pressure of the game so far, and indeed for the 80 minutes as a whole.

Penalties were being kicked regularly to the corner, and while Cov did outstandingly to hold out the waves of charges which came their way, the dam eventually gave way by the posts as Millar Mills went over from close range.

Trailing 14-3 at the break and playing into the conditions into the second half things looked bleak for Cov, especially when Ealing set up camp on the line once again soon after the restart.

This time they were repelled, despite Adam Peters seeing. He was followed into the sin bin by Will Davis, and having done so much hard work on the back foot Coventry all of a sudden worked their way back into the contest.

A Brown break took play into the Ealing half and when quick ball brought an overlap on the right Jennings slid through a grubber. The visitors made a hash of sweeping up the bouncing ball, and when Andy Forsyth was presented with the opportunity to finish he did so without a mistake.

Despite now being on the front foot Cov were not getting the rewards, with the Butts Park faithful becoming increasingly irate by what they perceived as Ealing getting away with a string of apparent offsides.

The noise from the stands was not influencing the officials, but there was no mistaking the high shoulder charge put in by Jack Tovey on Jennings and off went the centre to cool his heels.

Cov could not make the most of the man advantage, however, and with precious little flow or structure to the play from either side it was a case of taking the opportunities when they came.

The two remaining chances both fell to Ealing, Steven Shingler kicking one and grazing the outside of the right-hand upright with the other, meaning that when the full-time whistle came Coventry had no reward for their 80 minutes of effort.