Coventry Rugby’s Jack Preece, Will Maisey, James Stokes and Director of Rugby Rowland Winter have all picked up end of season accolades with the National Clubs Association (NCA). 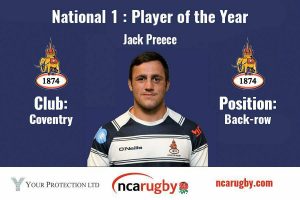 Hard-hitting flanker Preece picked up the National League One Player of the Year award after a sensational campaign. The NCA award went to the Flanker, but he could have been pipped to it by fellow colleagues Phil Boulton, James Stokes, Scott Tolmie and Will Maisey, all coming close.

The 28-year-old was grateful for the acknowledgement of this award but paid tribute to his fellow team mates.

He said: “It’s a great honour to win this award, it tops off what has been a great season with Coventry and I am really appreciative of being part of such a good team.” 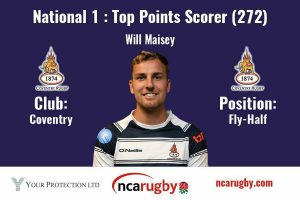 Prolific fly-half Will Maisey picks up the accolade of Top Points Scorer for National League One courtesy of the NCA with the 24-year-old picking up a whopping 272 points this season.

The Blue and White’s half-back believes that he has come on in leaps and bounds to improve his game this season.

He said: “It’s a massive achievement, I finished second last year, so it was a big improvement and I’m extremely happy to pick up this award.

“I knew that if I played consistently this year I would be able to rack up some points and thankfully with all the lads scoring tries this year it has given me extra opportunities to add more points this season.” 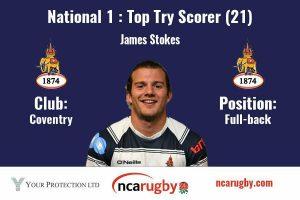 Full-back James Stokes has also bagged himself the Top Try Scorer award from the NCA after an astonishing season, breaking the clubs record of tries scored in a single season.

The record holder admits how honoured he is to be breaking records with what has been a very special year.

He said: “I’m very proud to receive this award, it’s testament to how hard all of the squad and management have worked this season and that we have so many of the lads that have scored so many tries this year.

“It’s great to play under Nick Walshe and Louis Deacon who have got us firing in attack and allow the boys out wide to finish some of them off.

“I know the record was held by Andy Smallwood which has stood for around 20 years and his name has floated around the clubhouse all that time. It’s nice to be mentioned in the same breath as players like that.” 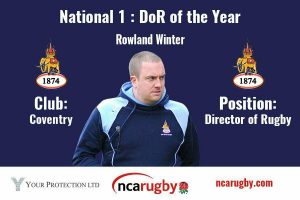 Director of Rugby Rowland Winter scooped Coventry’s fourth prize of the day and paid tribute to the coaches and management around him.

He said: “I am really grateful for the award but the quality and hard work of all my coaching team, management, medical and strength and conditioning team, make it an easy and enjoyable job to do.”