Ben Nutley – “I think clubs are going to underestimate us” 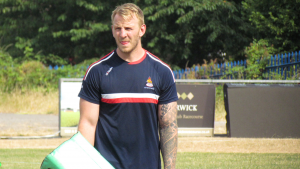 Coventry Rugby back row forward Ben Nutley believes teams are going to “underestimate” the Blue and Whites as the club ready themselves for a return to the Greene King IPA Championship.

The former Premiership winner signed for Coventry from Northampton Saints in the summer and the 26-year-old believes that the side will have a successful season.

“I think clubs are going to underestimate us this year and I think that we are actually going to have a good year,” Nutley explained.

“It will be interesting to see how the club develops and how the players develop so it is going to be an interesting year all round.”

After signing for Coventry, Nutley admitted why he joined the historic Midlands outfit and what part Director of Rugby Rowland Winter had to play in his move from Franklin’s Gardens.

He said: “Coventry was my last choice. I was on loan at Moseley a few years ago and no disrespect to them but they were a club battling out at the bottom of the Championship for many years and then final went down.

“A lot of teams that come up from National One to the Championship are the whipping boys, same as the Premiership, it’s a tough step up.

The 26-year-old was a crucial part in the Northampton Wanderers’ double A league titles over the past two years and Nutley revealed his predictions and aims for the coming season.

He said: “One of the main reasons for me moving here was to play, as much as I did enjoy my career at Northampton and I had some highs, but I had lows and realistically breaking through at 18/19 I never really had the amount of time I wanted, so playing a lot of rugby but also playing with a good group of lads and playing a decent brand.

“Also, probably being valued for what I can do is probably the nicest thing and coming through the academy you are always seen as the ‘academy kid’ whereas here you have been signed to play here because they want you.

“They have seen something in you and that’s a big plus for me, so I am looking to do well individually and also here as a team and a club.”

Nutley, capped 83 times with Saints, revealed how different his surroundings are at Butts Park Arena compared to Premiership facilities at Franklin’s Gardens and just how different his training schedule has been.

He said: “Facility wise, gym, medical, but that is the difference between the Championship and Premiership, it’s the facilities.

“Here there is the ambition with the stadium going up and the gym underneath and speaking to Rowland, it was one of the main reasons why I signed here.

“We are part-time and that makes a difference, pre-season at Northampton is usually hard, I don’t know how tough it is at other Premiership clubs, but it is definitely the toughest part of the year.

“I know my family don’t like speaking to me at that time but has been a lot more chilled, we do get a lot out of it.

“Obviously having eight weeks off has been a dream but it means we’ve got a smaller amount of time to get things right, but the rugby stuff has been on point. It’s a great way that we want to play rugby and you can see that coming into fruition week in, week out so we are getting better.

“It’s going to be, not slow progress but it will be great going into that first game ready to go.”

Despite working under Jim Mallinder for majority of his professional career, the powerful back row forward revealed how similar Mallinder and Rowland Winter are as Directors of Rugby.

“I was with Jim for most of my career, he was a guy that really helped me come through. They are very similar, Rowland isn’t a coach he is a delegator and he does that really well, he even said to me when I met him that he is a geek and he likes to put his pieces of the puzzle together in the right places and that’s the kind of thing that drew me to him,” continued Nutley.

“Jim gave Northampton their most successful period and I only have thanks to him, he did a great job there and it was sad to see him go in the way he did, and I think I will end up having a great relationship with Rowland as well and they are two Directors of Rugby that I respect.

Coventry Rugby topped National League One last season in convincing style, finishing 19 points clear at the summit and Nutley believes that the club are not going into the Championship to make up the numbers.

He added: “I am going to say top four. It’s our aim to win every game, that’s a no brainer, that’s what a professional club is all about, you don’t want to come in and say, ‘oh well we might not win that game’, every game we train for we train to win.

“As I have said I think we will surprise teams. A lot of people come up and are fighting it out at the bottom of the table, but I think we will be way above that so it’s going to be exciting.”