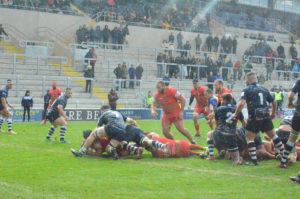 Coventry will hit the road in February’s quarter-finals of the Championship Cup after losing out to a strong Carnegie outfit. There had been little between the sides in a first half played in tricky conditions but it was the home side who had the better of the second period to book themselves a home tie when the competition resumes next year. The freezing conditions hindered both sides throughout but it was the visitors who had the chance to open the scoring on 14 minutes when they were awarded a penalty. Will Maisey took the kick but his effort veered off target. The breakthrough did come on 23 minutes and it followed a period of pressure on the Carnegie line. The Coventry pack recycled the ball and back row Jack Ram burst through to dot down. Maisey missed the extras but the early advantage was no less than the Blue and Whites deserved. Those points did seem to galvanise the hosts though and they slowly edged their way back into the contest.

They chalked up their first points just before the half-hour mark when fly-half Jade Te Rure slotted over a penalty and they then bagged their first try of the game a minute before the interval. A useful line-out ball was won which led to an impressive passing move along the backs with Harry Davey finding winger Elijah Niko wide on the left flank and he ran the ball home. Te Rure duly adding the conversion to give the Yorkshire outfit the perfect boost going into half-time. Rowland Winter would have urged his players to put that disappointment behind them and start the second half on the front foot. But things went awry within six minutes of the restart. Carnegie had won four of their five games in the competition going into this clash and their confidence was obvious as their powerful pack caused Cov to lose control of the ball close to their own line and when Davey picked up the ball he nipped over the line to extend the lead to 15-5.

The remainder of the game saw the visitors back in control but loose handling in the freezing conditions let the home side off the hook. Twice the forwards rumbled towards the line only to knock on each time. The final result was harsh on the Blue and Whites who had more than enough of the ball to make claim a cup double over Carnegie and book themselves a home tie in the last eight.