WHAT a great start to the pre-season for Coventry – winners of the Olney 7s, and Will Maisey named player of the tournament!

A narrow 14-12 win over Sherrards Assassins and a 31-17 victory against Bedford Ath Elites secured second place in their pool and a place in the quarter-finals, where a late, late try clinched  26-21 win and a semi-final against HW Green Dragon who were duly despatched 26-5.

The Development Academy Nighthawks squad competed well all day before going out in the semi-finals of the plate competition.

A fantastic day all round, congratulations to everyone involved, and thanks to all the Cov fans who travelled down and gave much appreciated support to the lads. 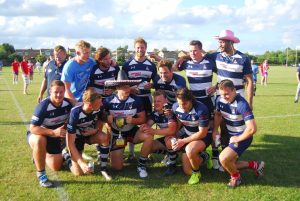