Will goes back to school

COVENTRY Rugby’s Will Maisey took a trip down memory lane when he returned to his alma mater, Kenilworth School & Sixth Form to present the trophies and certificates at the school’s 12th Sports Awards Evening where pupils were recognised for their achievements and efforts during the year.

As a pupil, Will represented the school in a number of sports and was a winner of the year 8 sports boy and year 7 rugby back of the year awards, and in his address he spoke about his journey in sport and the importance of maintaining his education alongside this.

“It was great to have Will come back to the school and present the awards,” said Lee Cassell, head of PE at Kenilworth School & Sixth Form. “We had 190 awards, such as most improved player and player of the year, in a variety of sports including rugby, football, netball, hockey and orienteering and we also have a sports boy and girl for each year group.

“Will was an inspiration and role model to the current pupils, to show that hard work really does pay off.”

Said Will, who was voted both Coventry Rugby’s supporters’ player and players’ player of last season: “I loved my time at the school. We had a rugby tour to Canada which I know the year 9s have just replicated and I heard it was another really good trip that they enjoyed.

“Some of the best times of my life were there and I have plenty of good memories. I really enjoyed going back – a lot of the staff from when I was there are still there.

I’m still balancing education with my work and sport – it’s something you learn to do at school and is important to today’s pupils who are just starting their journey.”

Will is pictured with award winners Ben Andrews (year 7 rugby forward of the year), Jack Boden (year 8 sports boy of the year – an award won by Will in 2006) and Elouise Sutherland (year 7 most improved athlete). 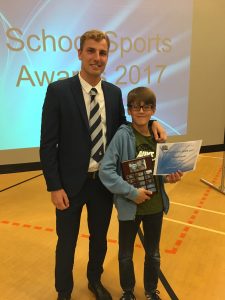 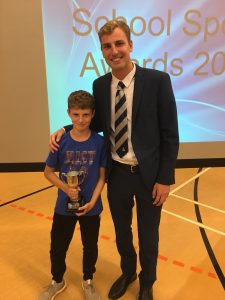 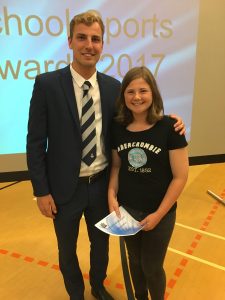