Where there’s a will….

HEAD coach Nick Walshe drew most satisfaction from Coventry’s strength of will after seeing them come from behind in the last ten minutes to end the season with a 27-22 win at Loughborough Students.

The home side took the lead for the third time in the game with 71 minutes on the clock, but Cov hit back immediately with two converted tries in the next three minutes which Walshe viewed as another indication of how much the squad has progressed over the last few months.

“It was the last game of the season and if you looked at the league table I suppose you could have questioned what we had to play for,” said Walshe.

“We talked all week about wanting to make sure we continued our unbeaten run, showing we had pride in the jersey and pride in the club, and doing it for the fans because we knew there would be loads coming over to support us.

“I’m just really pleased that the boys showed some real character and with the whole performance, it showed again how far we have come.

“We were six points down with not long to go, but we came straight back and scored and then we scored again – it just shows some real development in the team which I’m delighted with.

“This wasn’t like the game at home when we won by 50, this was a proper game where we had to dig in and fight. We knew Loughborough would be up for the game, their director of rugby is going to London Scottish so they wanted to finish on a high for him and they had huge motivation.

“Our error count was probably higher than it had been over the previous few weeks, but we still managed to find a way to win the game which is the biggest thing for me.

“It was the last game of the season and I wasn’t going to worry too much about the performance.

“We’ve made massive strides in the way we play and what we do, but it’s the mental side of their game we want to see and for them to say ‘come on, we know how to win this game’ and go on and do it says a lot about them.

“We’ve won eight on the bounce and had a massively good second half to the season, and we’ve got some good quality players coming in next year to add to the squad which has shown real qualities and improved so much.

“What we’ve done here doesn’t give us a divine right to win games next year so we’ve got to work hard, but it’s encouraging and for a coach, when you see this mentality and this character, that’s when you get the most satisfaction.”

After initially coming to Cov in a consultancy role in the early part of the season, Walshe is delighted to have agreed a new two-year deal to remain at Butts Park in his enhanced position.

“When I came in I suppose I didn’t really know what I was coming into,” he said. “I did a bit of consultancy work but, obviously, it naturally develops into more because you care – I’m a proud individual, and I want to see the guys win and doing well.

“It was a no-brainer for me to stay. I can see where the club is going, Rowland Winter wants to take the club where I want to take it, we want to do well next year and we want to keep building this club up.

“It’s got a massive history, it’s one of the most famous clubs in the country and it’s got huge potential. Everything is there – the stadium, the fans, the chairman – everything about it has got massive potential. We’ve got make sure we use that and move this fantastic club forward.

“I heard a saying recently, you’ve got to think so you might as well think big, so let’s take this club as high as we can.” 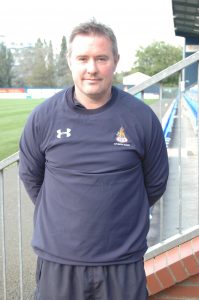