Welcome back to Heath

COVENTRY Rugby is delighted to announce the return of centre Heath Stevens to Butts Park Arena.

The 24-year-old was part of the London Welsh squad up until the Championship club’s demise last month and is expected to be involved for Cov in Saturday’s game at Fylde.

Stevens spent three seasons at Cov between 2010 and 2013, making 79 appearances and scoring 18 tries, before joining Plymouth Albion for a season. He then spent two years with Worcester Warriors, which included a loan spell at Nottingham, and moved to London Welsh last summer, making six appearances. 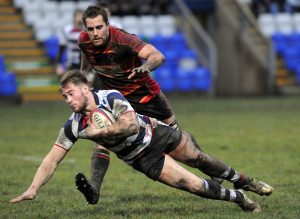 “He will strengthen our squad, and he knows a number of the players well so should settle in quickly.

“Heath has picked up plenty of experience since he left Coventry and has regularly shown he can perform well in the Championship.

“He will provide another direct and physical option for us in the backs, which we’ve lacked at times this season, and we look forward to having him involved this weekend.”