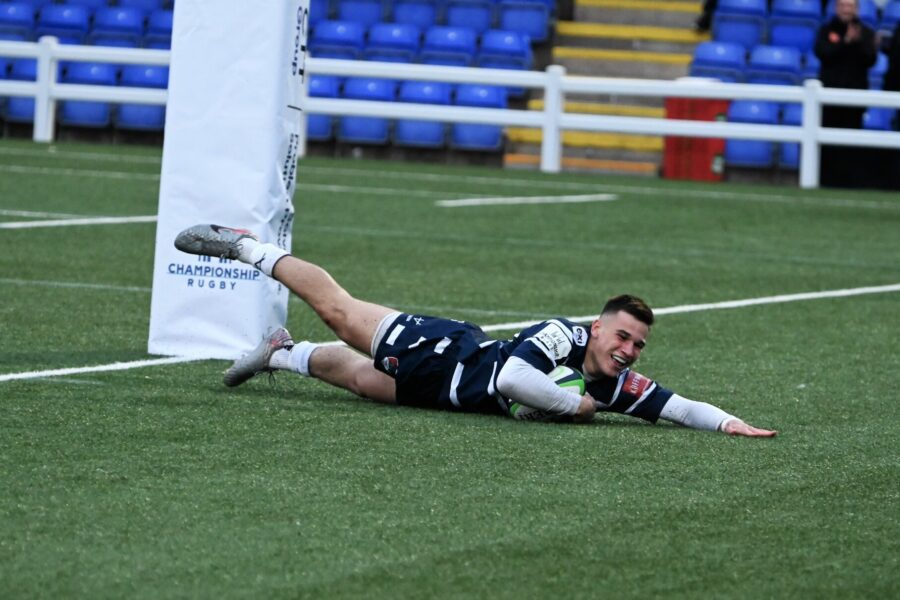 Coventry’s academy squad step up to the mark and drive the much needed win in Round 7 of the 2021/22 Championship.

There was uncertainty in the air at Butts Park Arena with injuries continuing to threaten Coventry’s matchday 23. A last-minute change at fullback, Sam Aspland-Robinson was replaced by Tom Stanton prior to the first whistle.

For weeks now, Coventry has been threatened by a wave of injuries that has ruled out influential figures from consideration – the most recent of which, Captain Ryan Burrows. Despite this, Director of Rugby Rowland Winter has not been willing to use this as an excuse for the string of frustrating performances, commenting “we’ve been tested over the last couple of weeks but we’re not one to shout about our injuries”.

But in the end, the Coventry faithful needed not to worry, as the Blue-and-White’s returned to their winning ways and to the delight of the fans, it was the young talent of the academy leading the charge in Saturday’s performance.“For every injury we get, there’s an opportunity for a young academy player to come through” Winter explained – and boy did those players take it.

For the first time in a few weeks, it was Coventry making the most of opportunities presented “we got the bounces we haven’t got for a few weeks, we got the intercepts, the chip throughs and we haven’t had that for a month or so – the bounce has been going the other way” Winter explained.

The first points for Coventry came only four minutes into the game from a penalty and it was young Evan Mitchell on the end of the successful boot. We didn’t have to wait long for the first try, however. From a Nottingham scrum, just shy of the oppositions 10-meter line, a few opportunities to claim a loose ball presented. In the end, it was Rob Stevenson who saw it through, scooping up the ball and running it right under the posts. Mitchell had no issues with the successful conversion leaving Coventry 10 points up 13 minutes into the game.

It would be another 10 minutes before we would see the next points, but it was clear to see Coventry’s intentions for the result and a clear dominance in the game. Progressively working their way down the pitch from a line out on their own 10 meters, Coventry managed to keep a hold on the ball against a resilient Nottingham defence. A quick pass from Mitchell, Joe Snow looked uncertain to what way he would go. Louis James just behind him offered support and bound through the gaps with a delightful sidestep. Mitchell made it look easy with another conversion sliding through the posts – Coventry now 17 points up.

The penalty count for Nottingham soon began to stack up, with three consecutive penalties given away to Coventry. Points came from two of these in the 29th and 32nd minute of the game making the lead for Coventry now 23-0.

Nottingham – not looking to go home empty-handed, secured their first try of the game just before the end of the first half. Carl Kirwan was on the end of a quick pass just in front of the try line. A successful conversion from Samuel Hollingsworth now had Nottingham 7 points into the competition.

Less than ten minutes into the second half, it looked as though Nottingham were about to score their second try. The ball -moved laterally down the line for a few minutes and resulted in a couple of very close mauls just millimetres from the goal line. Against all odds, Coventry’s defence somehow managed to force Nottingham to retreat, causing them to pass wide. What happened next was the icing on the cake for Louis James’ performance with him intercepting the ball in an end-to-end spectacle. Mitchell secured another successful conversion – Coventry now 30-7. Each side went on to score one more, either without a conversion rounding out the score to be 35-12.

Winter, happy to have some time to rebuild before the next fixture explains “it’s a great opportunity, the next couple of weeks we’ve got 14, 15 boys that are unavailable at the moment for one reason or another and I’m hoping at least four or five of them will be back for our next league game and actually having a couple of weeks without that may be just the tonic we need”.