Trio re-sign and Harry moves in

COVENTRY Rugby is delighted to confirm that three more members of the current squad of forwards have signed contract extensions as the club builds for next season.

Back rows Brett Daynes and Olly Povoas, and prop Jimmy Litchfield have all committed to Cov’s cause for another year – and they will be joined at Butts Park Arena by loose head prop Harry Morley, who is arriving from Championship club Nottingham.

England Counties flanker Daynes, 29, joined Cov for the start of the 2010-11 season and, apart from one year at Cambridge, has been an ever-present on the club’s National League One journey, making 123 appearances so far and scoring 24 tries.

Litchfield, 25, came to Cov in the summer from London Scottish and, packing down on both sides of the scrum, has made 23 appearances so far in an impressive debut campaign which was rewarded with an England Counties call last month.

Povoas, 20, is also in his first season at Butts Park and has made seven appearances at flanker despite early injury setbacks.

Morley, 22, graduated through Northampton Academy and after playing at Birmingham & Solihull for a season he has spent the last three years at Nottingham, making 18 appearances and including loan spells at Leicester Lions and South Leicester.

Said director of rugby, Rowland Winter: “Brett brings a lot to the team on and off the pitch, and offers a more all-round skill set to some of our other back row options.

“He is now one of the most senior and experienced players within the squad and is becoming a real clubman.

“Jimmy has shown his ability and consistency as a dominant scrummager, and is now beginning to demonstrate real potential around the park.

“His performances have transformed this season and I am looking forward to seeing him kick on next season.

“Despite being plagued by injuries, Olly has shown his quality when he has played. He is a hard-working, tough back row player who grafts incredibly hard for the team.

“He will now develop the finer details to his game over the next year and we should see some stand out performances from him.

“Harry is a big, strong loose head prop who has had exposure to Championship rugby and now needs more game time to develop.

“He will be a good addition to our front row group and with Boris Stankovich’s coaching we see lots of potential in him.

“There are lots of similarities to the Jimmy Litchfield of a year ago, so we are excited to see what Harry can do at Coventry.” 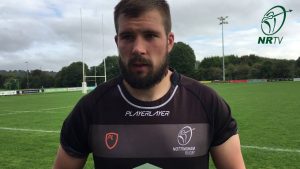