Tony’s kicking on with Cov

IT’S a statistic that has escaped too much attention, but Coventry’s Tony Fenner starts the New Year with the best success rate off the kicking tee in the whole of National League One.

And with a near-faultless record since he resumed duties last month, it can only bode well for Cov’s progress over the remainder of the season in their attempts to climb up the table.

While Will Maisey’s late match-winning kicks have understandably taken the headlines, Fenner’s accuracy rate of 88.46% has also played a significant role with recent performances underlining his return to fitness.

After a good pre-season, the 27-year-old fly-half began his first campaign at Butts Park Arena as first-choice kicker, but a succession of knocks and niggles forced him to relinquish the role until the game against Old Albanian at the start of December.

“I had to give it up for a little while as I had a bit of a knee problem and wasn’t able to practice,” said Fenner whose wife, Luzaan, is expecting their first child this summer.

“If you don’t work on your goal kicking in the week it just becomes a case of pot luck, but with Will and a couple of other guys in the team who could fit in, we could work it around them while my knee was sore and it took the pressure off me to practice.

“Once I could start practicing again I could get back in the groove, and it’s going well at the moment.

“It’s been great for me at Coventry – I had a couple of knocks early on, but I’m using up every roll of tape in the club, the niggles have just about gone, I’m starting to feel that my form is coming back, and I’m feeling better and better with it every week.”

Competition between Fenner and Maisey for the 10 shirt has been intense all season and the subject of lively debate among Cov’s supporters.

“I think it’s one of the strongest areas of competition in the whole squad and that’s a good thing for Coventry,” said Fenner.

“I can’t speak highly enough of Will, he’s a great bloke off the field as well. He’s a little bit younger than me, I try to pass on the experience I’ve got to him and vice versa, and we work together really well. If one of us comes off or can’t play, things just carry on.”

The most cosmopolitan of Cov’s summer signings with experience at clubs in New Zealand, South Africa, Italy, Scotland and France, London-born Fenner was into football as a boy but admits that he “just fell in love with the game” after going along to a couple of rugby sessions.

His first clubs were Bletchley, in the under-11s, and then Buckingham before he made the move to Bedford Blues where he figured in two National Colts Cup final wins, one against Nuneaton.

From there, he spent time at Rosslyn Park before his career took a less conventional path with a move to New Zealand.

“I was given the opportunity to go over there and kept putting it off, but then one day I just decided that really I’d got nothing to lose at 19,” he said.

“I was thinking it would just be for a season, but I ended up spending three years over there – I loved it and it was my foundation in professional rugby.

“It’s a great learning ground and you have got to grow up quite quickly over there.”

After an initial run at the Otahuhu club in Auckland. Fenner spent time at Eastern Province Kings in South Africa before he returned to New Zealand and Otago, from where he was invited to train with the Highlanders Super Rugby squad.

A loan spell at Italian club Modena followed before Fenner finished his time in New Zealand at Auckland, then returning to Europe and playing for Viadana in Italy, Edinburgh Reivers and, last season, French club Limoges.

The move to Coventry came through his friendship with Corey Hircock, who initiated the first contact with director of rugby Rowland Winter.

“My wife wanted to settle down and start a career, and it was at the point where it was the right time to come back if a decent opportunity came about.

“Corey’s a really good friend of mine, he’d worked with Rowland at Cambridge, and he put him in contact with me.

“I came over last Christmas while I was in France and met with Rowland, and he set out the plans for where Coventry were going to. I remember from growing up how good Coventry were, so it was an easy decision in the end.

“I’m on a one-year contract at the moment, but I’m hoping that I’ll be around next year as the club continues to move forward.

“I think we have to look at 2017 now as a chance to push on. We can’t just say that Hartpury have the league won and take our foot off the gas, that wouldn’t stand us in good stead for next season.

“We need to build on what we’ve learnt over the year and aim to finish as high as we can, it’s tight up there behind Hartpury and we have got some of the big teams at home , so we can look towards second place.

“We had a couple of sessions last week to blow away the cobwebs, everyone has stayed in shape over the beak and we have trained well this week, so it’s building up to Macclesfield nicely.” 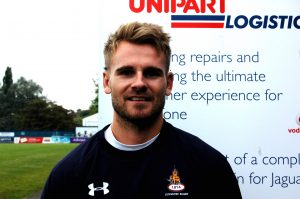